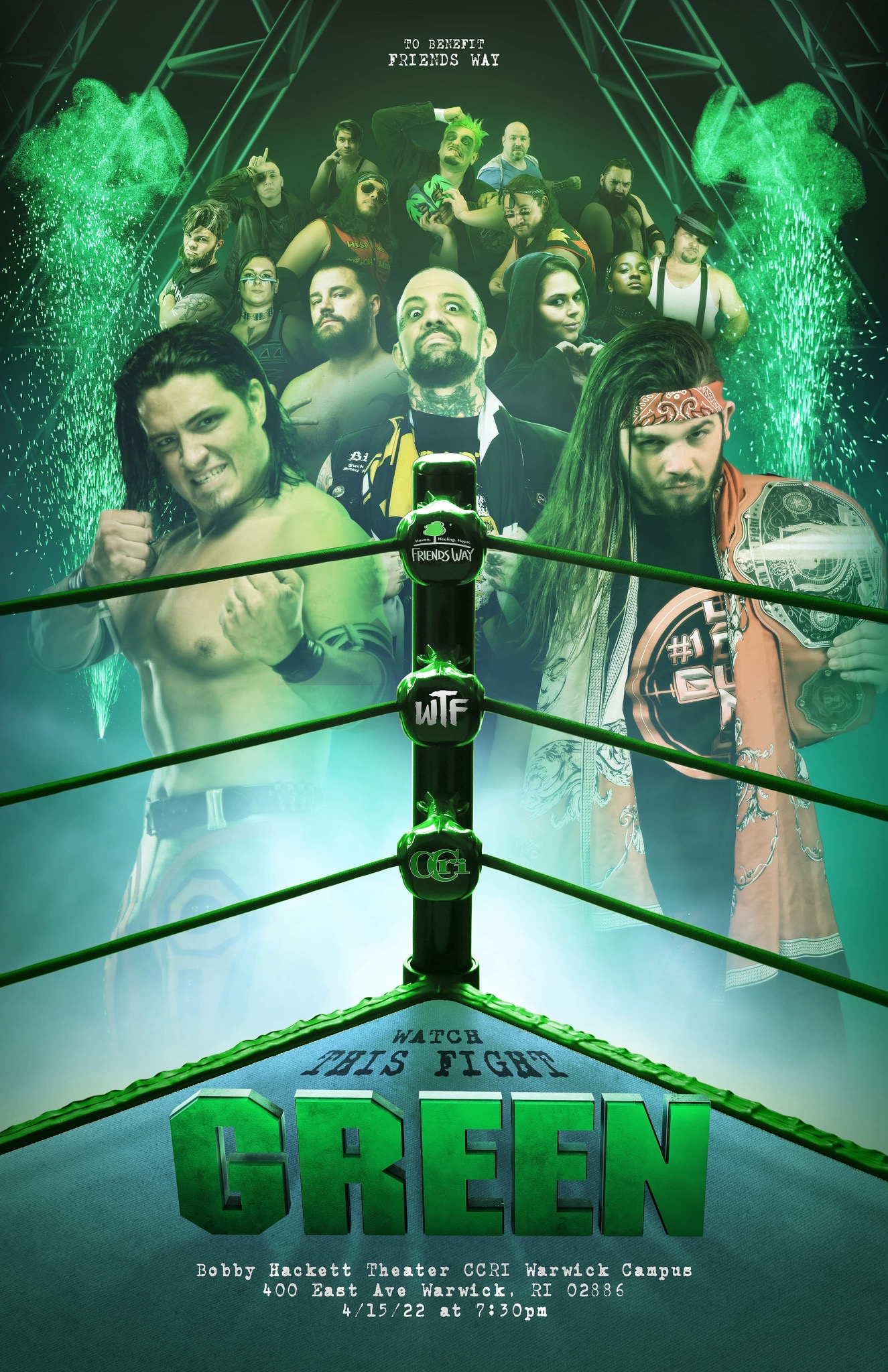 Can you smell what the Community College of Rhode Island Theater Program is cooking?

The CCRI Players and the Office of Student Life are teaming with Watch This Fight (WTF) Wrestling, a Rhode Island-based independent wrestling promotion founded by Class of 2016 alumnus Nic Carcieri, on Friday, April 15 at the Knight Campus’ Bobby Hackett Theatre to present Watch This Fight Green 2022, an action-packed charity event with all proceeds benefiting Friends Way RI, a bereavement center dedicated to children and teens ages 3–18 and their adult caregivers.

The event features 24 professional wrestlers – three of whom are current CCRI students and two who are alumni – competing in seven matches, highlighted by reigning WTF champion “AJP,” a current student and Tiverton, RI, native, defending his title in the main event against Rick Recon. The first bell is 7:30 pm and tickets are available online at ShowTix4U.com.

Through his relationship with Carcieri – a Cranston firefighter, wrestling referee, and occasional in-ring performer – CCRI Theatre Program Director Ted Clement channeled his inner childhood as an '80s wrestling fanatic to bring the college a unique event that also benefits a great cause. Carcieri promoted his first event in 2016 to raise money for the family of a colleague who died of brain cancer.

Since then, all proceeds from every WTF show have benefitted a specific charity, among them Pink Heals; The Tomorrow Fund at Hasbro Children's Hospital; and, most recently, Operation Stand Down RI.

Why pro wrestling? With its over-the-top personalities, embellished storylines, and high-flying acrobatics, wrestling, as Clement describes it, is performance theater at an ear-splitting volume.

“Professional wrestling has all the hallmarks of great theater,” Clement said. “The stories, narratives, protagonists, antagonists – it’s a world unto itself.

“To bring wrestling to our environment is a thrill, because wrestling is theater and has all the elements of what makes theater exciting and immersive.”

“We have a lot fun and raise some money,” Carcieri said. “The opportunity for us to do something we love while benefitting a good cause is rewarding.”

The matches scheduled for WTF Green 2022 are a mishmash of some of wrestling’s best gimmicks and concepts, from the Fatal Four-way Tag Team Championship featuring four tag teams competing at once for the promotion’s vacant title to the Women’s Triple Threat Match between current student and Warwick native “‘The Great Warrior Wolf’ Nakoma Tala,” Class of 2015 alumna “Isana,” and “Dajaé Simone” in which the first wrestler to score a pinfall or submission wins.

The most chaotic match could be the Five-Man Fanny Pack Scramble, which opens with all five competitors in the ring at once. The first one to score a pinfall or submission wins. The prize? A fanny pack, of course.

Cranston native and current student “BC Kidd” is one of the five wrestlers competing for the coveted fanny pack, and Class of 2007 alumnus “R.I.O.T. Kellan Thomas” battles “Masshole” Mike McCarthy in a singles match.

The wrestlers appearing at WTF Green 2022 are part of the expansive New England and northeast independent – or indie – circuit, which is comprised of small regional promotions, comparable to minor-league baseball affiliates such as the Worcester Red Sox.

Most, if not all, wrestlers cut their teeth on the indie circuit, and several who began in the northeast are currently wrestling for major television promotions, including Tommy Wansaw, a.k.a. Bear Boulder, a New Jersey native who wrestled twice for Carcieri at WTF and is now part of the tag team Bear Country wrestling for All Elite Wrestling (AEW), whose weekly AEW Dynamite show averages nearly one million viewers. The up-and-comers stepping into the ring on April 15 could be the stars of tomorrow.

“A lot of the talent in this area has an opportunity to climb the ladder to one of the bigger promotions,” Carcieri said. “That’s the beauty of what we do. Every once in a while, the right person gets the right push at the right time. You never know where you might see them next.”