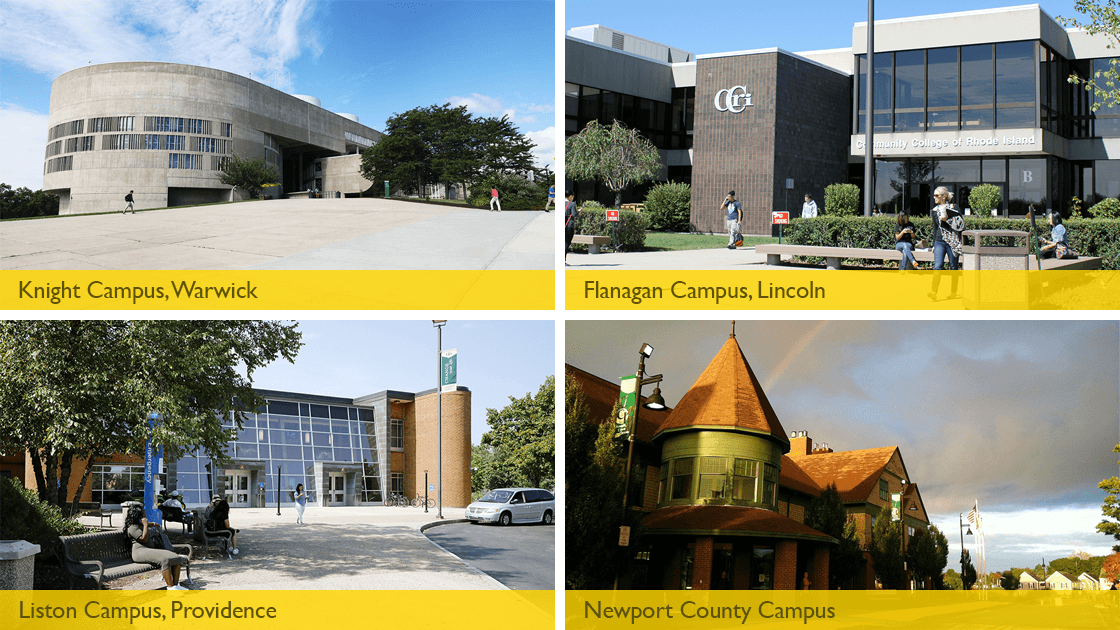 The College provides a variety of academic, career, and technical at four main campuses in Warwick, Lincoln, Providence and Newport. Courses are also offered at satellite campuses in Westerly and Woonsocket.

In January of 1960, the Rhode Island Junior College state system was established by an act of the Rhode Island General Assembly. The legislation closely followed the recommendation of a Commission to Study Higher Education, which called for the establishment of a statewide system of junior college campuses with facilities in the Pawtuxet Valley, Blackstone Valley and Mount Hope areas of Rhode Island.

In March, 1964, the Board of Trustees of State Colleges appointed Dr. William F. Flanagan as the first president of Rhode Island Junior College. The College opened its doors in temporary quarters in Providence on September 24, 1964.

Original plans called for an enrollment of 200 students in the opening class, but because of the large number of applications from both faculty and students, Governor John Chafee permitted the expansion of the initial enrollment to 325 students.

On October 7, 1964, Royal W. Knight of Warwick made a gift of 80 acres of property, including a historic homestead and other buildings, to the College. This became the permanent site of the Rhode Island Junior College campus, named the Knight Campus by the Board of Trustees. Later acquisitions of adjoining land increased the campus area to a total of 205 acres.

The Knight Campus, located in the western section of Warwick, adjacent to Routes 2 and 3 and easily accessible to Routes 95 and 295, opened in September of 1972, with an enrollment of close to 3,000 students. All facilities at this campus are housed under one roof, a futuristic megastructure which encourages social, educational and cultural exchanges among the entire student body.

In November of 1970, Rhode Island voters approved a $12,250,000 bond issue for construction of the Flanagan Campus and preliminary planning for a Newport-Mount Hope Campus.

Construction of the Flanagan Campus started in the summer of 1974. The 300-acre campus, located on Louisquisset Pike at Route 146 in Lincoln, opened in September of 1976, with an enrollment of 1,700 students.

Like the Warwick facility, the design of the Flanagan Campus encourages interaction among all students. One large building, made up of three connecting modules, totals nearly seven and one half acres of floor space and includes such innovative features as solar panels for heating water in the field house and computerized temperature control for the building.

The College's second president, Edward J. Liston, was inaugurated on April 1, 1979. Under his leadership, the College continued to expand with the offering of off-campus credit and non-credit courses at satellite locations.

On June 26, 1980, the Rhode Island Board of Regents for Education approved a change in the name of the College from Rhode Island Junior College to Community College of Rhode Island to reflect the true mission of the institution.

CCRI embarked on a new period of growth and development and reestablished its roots in the inner city with the opening of a permanent community college campus in Providence. In the spring of 1990, the Community College of Rhode Island acquired the Opportunities Industrialization Center building located at One Hilton Street in South Providence. The Providence Campus opened in September of 1990. The urban campus makes higher education more accessible to inner-city residents, a fundamental mission of community colleges nationwide.

The new campus appears as a single, three-story building; however, it is actually three separate, but connected, structures that include a student services complex, a classroom/laboratory wing, and an auditorium.