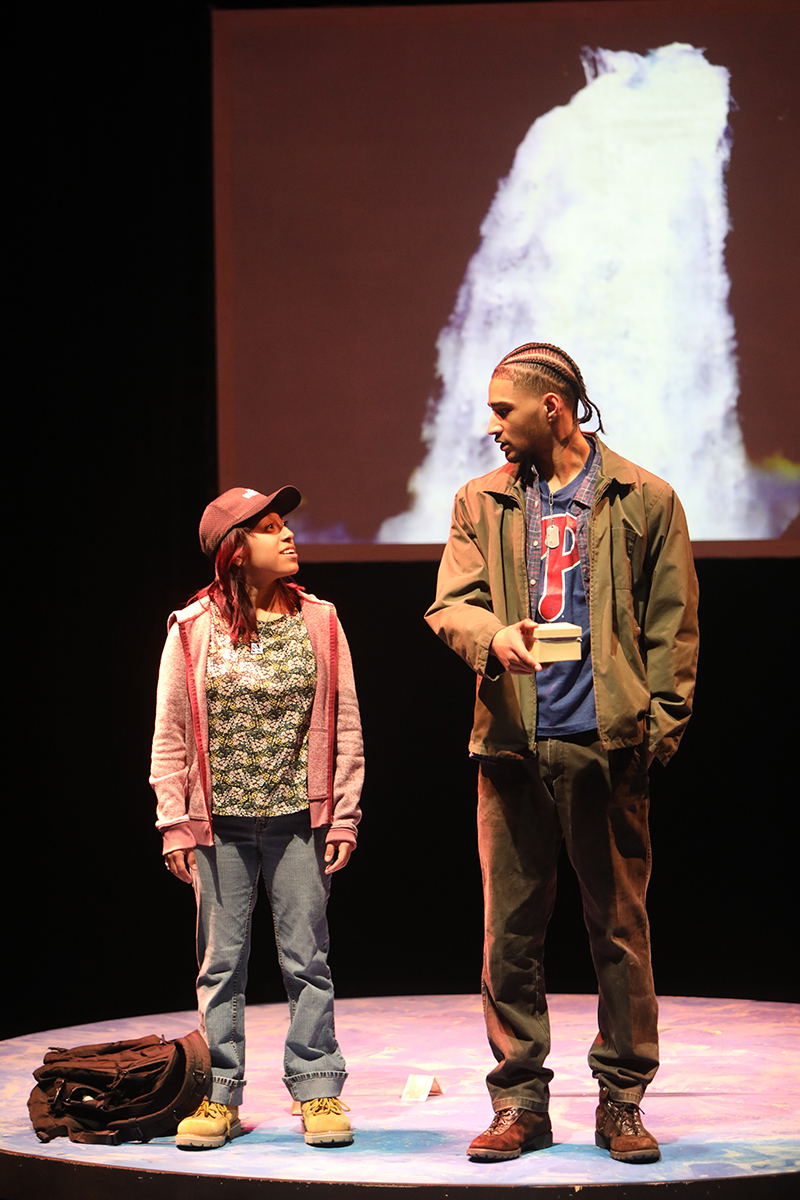 The Community College of Rhode Island Players launch the spring portion of their 2021–22 Theater Season this week with a production of Water by the Spoonful, a thought-provoking play by Pulitzer Prize-winning playwright Quiara Alegria Hudes that delves into the lives of characters struggling with everyday issues while balancing their online and real-world personas.

Water by the Spoonful premiers Thursday, March 3 at 7:30 pm at CCRI’s Bobby Hackett Theater in Warwick and continues through the weekend with matinee and evening performances on Saturday at 2 and 7:30 pm and a 2 pm finale Sunday. Tickets are available at the box office or online at ShowTix4U.com. You can also catch a sneak peek in our online photo gallery.

Directed by Adjunct Theatre Professor Kevin Olson, Water by the Spoonful is the second part of Hudes’ Elliot Trilogy, which focuses on the character of Elliot Ortiz (played by Eddy Tavares of Pawtucket, RI), a 24-year-old Iraq War veteran suffering from bouts of post-traumatic stress disorder (PTSD) stemming from his violent past while trying to preserve contemptuous relationships with various family members.

Water by the Spoonful takes place in two different worlds that astoundingly cross paths: Elliot’s post-war real world, and an online world of recovering addicts chatting anonymously in an online forum moderated by a fellow recovering addict who goes by the screen name Haikumom. The characters in this chat room range from a 56-year-old IRS employee to a 20-something Japanese woman adopted by American parents who returns home to discover her true identity. The play touches upon a number of themes and everyday struggles – self-reflection, addiction, isolation, honesty, and, ultimately, forgiveness – which become paramount in Elliot escaping his past and rebuilding his relationship with his biological mother.

Having used Hudes’ work as a teaching tool in previous classes, Olson decided Water by the Spoonful would blend seamlessly into the Players’ spring schedule as an opportunity to showcase works by BIPOC playwrights and allow CCRI’s BIPOC theatre students to assume lead roles in the production. Olson describes Water by the Spoonful, which won the 2012 Pulitzer Prize for Drama, as a “probing exploration of addiction and isolation with a warmth for humanity … and with a belief in the power of a resilient human spirit.”

The production is also timely in that many have dealt with isolation throughout the pandemic both personally and professionally from stay-at-home directives and quarantine mandates, an issue featured prominently in Water by the Spoonful as the main characters deal with isolation in various forms, whether through communicating anonymously with others online or struggling with the idea of being isolated from their families due to past habits and mistakes. Olson also notes the “isolating world of being an addict” that is a reoccurring theme throughout Water by the Spoonful.

“The play offers our artists the opportunity to explore the lives of these interesting characters in deep and meaningful ways, telling their stories with passion and empathy,” Olson said. “Water by the Spoonful is very theatrical and it’s a complex play to produce. The appeal to me was the challenge of doing something that had different levels of complexity.

“The cast is excited to be a part of this production. A lot of the issues in the play are centered around addiction, isolation, and PTSD, and they are certainly aware of those issues as part of contemporary life. The subject matter really appeals to students.”

Remaining cast members include: Mireya Cellina Hoffens of Providence, RI, as Yazmin; Lia Pinto of Rumford, RI, as Odessa/Haikumom; Allison Wong of Barrington, RI, as Orangutan; Nate Campbell of North Kingstown, RI, as Chutes&Ladders; Ryk McIntrye of Providence as John/ Fountainhead; and Sam Gonzalez of Providence as the ghost of Elliot’s first kill in combat, which also plays a Japanese policeman and the role of Professor Aman.