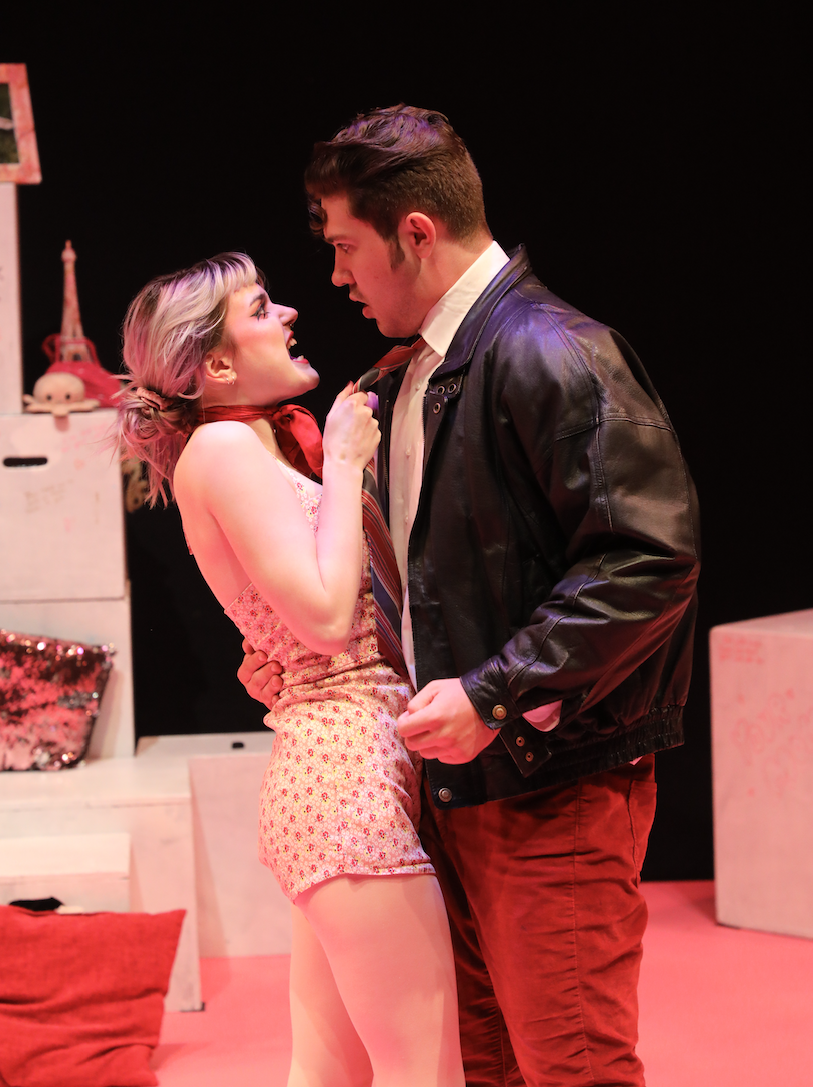 Established in 2017, the Summer Rep program offers students the opportunity to stage two classic Shakespeare works in a professional setting. Students design and produce two shows in eight weeks, replicating the environment of “summer stock theatre,” which has traditionally been a launching point for the careers of young theater enthusiasts.

After the COVID-19 pandemic forced the cancelation of the 2020 and 2021 seasons, Summer Rep returns July 21–24 with Shrew, an adaptation of Shakespeare’s The Taming of the Shrew directed by CCRI alum and first-time director Tabi Baez-Bradway. Showtimes are 7:30 pm from July 21–23 and 2 pm on July 24. Tickets are available online at ShowTix4U.com priced at $20 for general admission and $15 for seniors and CCRI students and employees. [View our online photo gallery]

Baez-Bradway, a Cranston, RI, resident and Kennedy Center American College Theater Festival award-winner at CCRI, says the Players’ adaptation of Shrew touches on neurodivergence in relationship dynamics, a unique twist on the original Shakespeare play that depicts the courtship of Petruchio and Katherina (Kate), the latter being the shrew who must be “tamed” and turned into a compliant, obedient bride in order for her father, lord Baptista Molina, to allow others to pursue her younger sister, Bianca.

Shrew features its own version of Kate – played by Portsmouth, RI, native Courtney Satterley – who “says the wrong things … does the wrong things … and she seems to never think twice before barreling through with a wrong choice in the search for clarity.” Baez-Bradway says Shrew also explores the possibility of Kate being a witch “in the sense that she has untapped power that everyone seems to be aware of and afraid of except for her.”

The timing of a The Taming of the Shrew modification, according to Baez-Bradway, is appropriate considering the recent controversy regarding women’s rights in the wake of the U.S. Supreme Court overturning Roe v. Wade; through the years, the original play has engendered its own controversy for its alleged misogyny and insistence on patriarchally-enforced gender roles in marriage. The Taming of the Shrew has also been adapted numerous times for stage, screen, opera, and musical theatre, including 1999 comedy film 10 Things I Hate About You and the 2003 romantic comedy Deliver Us from Eva, which are also loosely based on the play.

The Players’ adaptation, Baez-Bradway admits, “hit people a little harder in rehearsals” with numerous cast members, including Baez-Bradway themself, feeling a personal connection to the subject matter. Combined with the long-awaited, highly-anticipated return of Summer Rep, Shrew promises to be an emotional journey for the viewer, exploring the aforementioned multi-layered themes of relationships, sexism, and modern-day gender roles.

“If I had a play to choose, it probably would have been this one because it’s one that’s almost never done and I had a lot to say about it,” Baez-Bradway said. “It’s super exciting because we changed a few things with this production. We’re calling it Shrew because we’ve come to find it’s more of an adaption that we’ve created rather than something that’s sticking to the history and the hard text.”