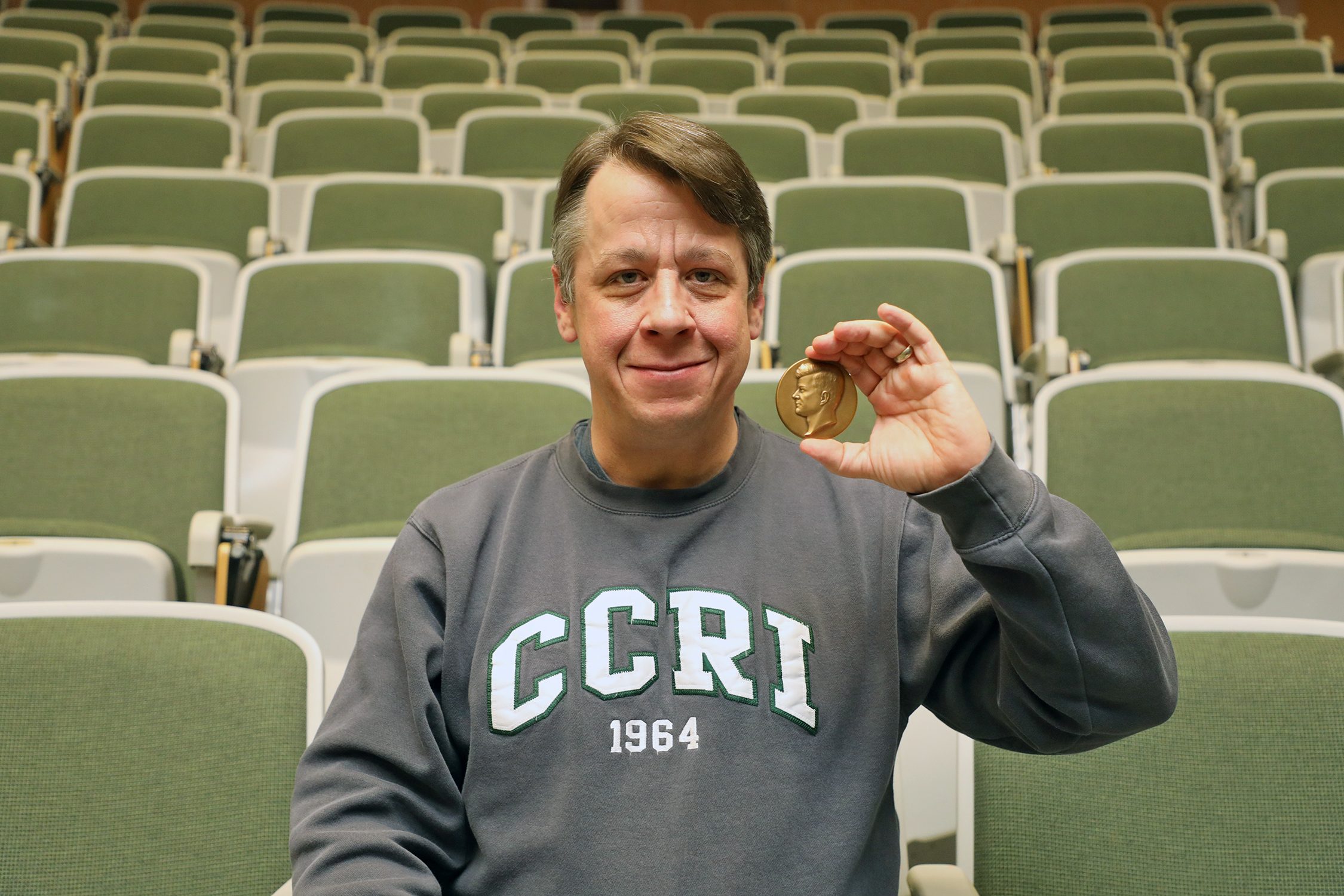 Community College of Rhode Island Performing Arts Professor and Theatre Program Coordinator Ted Clement of Cranston, RI, received this year’s prestigious Kennedy Center American College Theater Festival (KCACTF) Region 1 Medallion for his decade-long service to the KCACTF and his more than 25 years’ worth of experience as a theater student, artist, mentor, and educator.

The KCACTF is a national theater program involving more than 18,000 students annually from colleges and universities across the country, culminating each year in a week-long conference for participating students. The participating colleges represent eight regions, with CCRI belonging to Region 1, which also includes schools from northeast New York, Maine, New Hampshire, Vermont, Massachusetts, and Connecticut.

Each year, the eight KCACTF regions honor individuals and organizations that have made extraordinary contributions to the teaching and producing of theatre and who have significantly dedicated their time, artistry, and enthusiasm to the development of the annual festival. Most importantly, recipients have demonstrated a strong commitment to the values and goals of the KCACTF and to excellence in educational theatre. The Kennedy Center Medallion is the most prestigious regional award given by the KCACTF and is considered one of the great honors in theatre education.

Clement’s connection to the KCACTF spans more than two decades; he first attended the festival in 1997 as a student at CCRI and credits the relationships built that year with theater professionals and fellow students with influencing his decision to transfer to Salem State University, where he graduated with a Bachelor of Fine Arts in Acting. He went on to receive his Master of Fine Arts in Acting at the New School for Drama in New York City.

Over the past decade, Clement has continued to contribute to the KCACTF, starting first as Hospitality Host before working his way up to Respondents Chair, a role in which he coordinated the assignment of respondents to participating KCACTF schools across Region 1 to attend shows and nominate performers for the annual festival. He spent the final six years of his tenure with the KCACTF as Regional Co-Vice Chair and eventually Co-Chair, where he helped shape organizational policies, implemented a job fair for theatre hopefuls, and worked to increase the KCACTF’s diversity and inclusion rates. Clement also served as the master of ceremonies for the Irene Ryan Acting Scholarship Showcase at the 50th Annual KCACTF National Festival in 2019 and ultimately became a policy writer for the national group, most notably writing the organization’s DEI (diversity, equity, and inclusion) statement. He continues to contribute to the KCACTF in an advisory role.

“To receive the Medallion is a tremendous honor,” Clement said. “I had the opportunity to attend the festival five times as a student, so when I became a professor, I wanted to be involved in the festival right away.

“KCACTF provides opportunities for students develop their craft and to find their way into the theatre industry. It’s an illuminating, empowering experience to attend a conference full of your colleagues and thousands of students building their careers. I’ve learned so many different approaches to my craft and developed myself professionally as a teaching artist.

“I certainly was motivated to be as involved as I was because of the profound experience I had as a student, and I’ve found it to be truly rewarding. It was an honor to be able to help shape the festival for six years and see those students perform on the Kennedy Center stage.”

In addition to his professorial role at the college, Clement serves as a mentor to the leaders of the college’s student-run theater group, the CCRI Players. He is also the Coordinator of the CCRI Summer Repertory Program, a community theatre project designed to recruit high school students for the CCRI Theatre Program and increase community engagement.