With a new passion for their craft, Theater student publishes second book of short poems 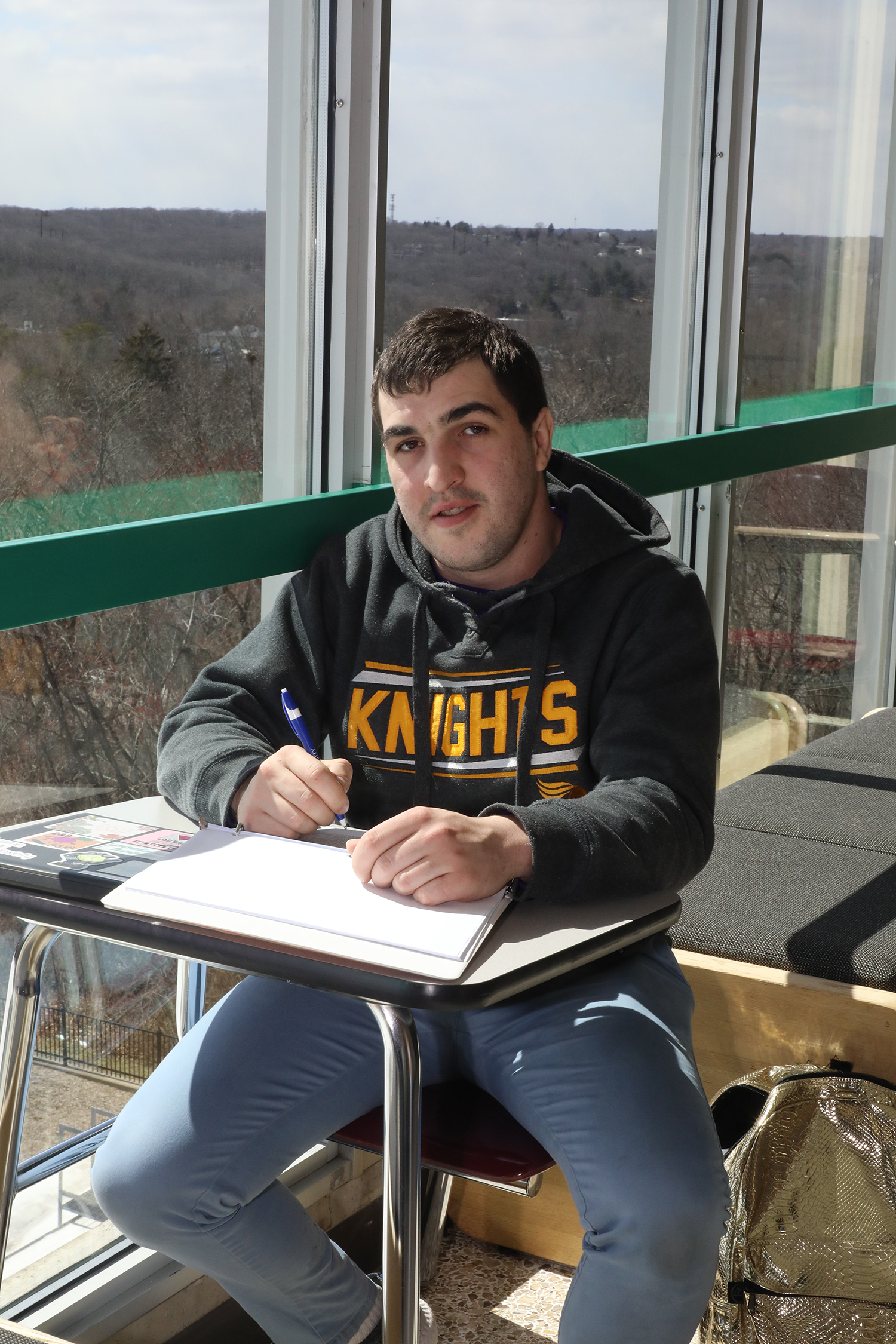 Poetry helped Ilyus Evander find themselves during their darkest hours. The Community College of Rhode Island helped them turn that passion into purpose.

Evander (they/them), a non-binary, transfeminine student from Providence, RI, is in their second semester at CCRI studying Technical Theater and is also on the cusp of releasing their second book, Good Mourning Bad Dreams, a short collection of poems that explores family relationships through a series of dreams and nightmares.

The book is available for pre-order through Ginger Bug Press and will officially hit shelves in May, their second publication since 2020’s Heavier Than Wait, which the author describes as “a tender guide to a queer experience in mental illness.”

The fourth oldest of 12 siblings – five biological, four adopted, and four step-siblings – who grew up in a Christian household, Evander battled myriad mental health illnesses from bipolar disorder to anxiety while struggling to gain their family’s acceptance.

They initially dabbled in poetry as performance art, competing in poetry slams and “writing for the approval of others.” As Evander learned to play with – and challenge – the rules of conventional poetry, writing became more therapeutic, resulting in abstract poems that they say are “a lot less accessible to lot of people.”

“Everything is tucked behind a cute, little locked door,” said Evander, 27, “and you all have permission to unlock the door.

“It’s just a matter of whether or not you figure out the puzzle.”

Poetry wasn’t always in the cards. Although they participated in band and theater in high school, Evander enrolled in Coventry’s Regional Career and Technical Center, where they earned their Certified Nursing Assistant certificate with the intent to study Nursing in college.

After graduating high school in 2013, Evander lasted just one semester at CCRI before realizing Nursing wasn’t for them. The original plan was to take a semester off, regroup, and return to school with a new focus. Instead, Evander said, “I took a semester off that lasted eight years.”

But the time away from the classroom proved life-changing for a disoriented, 19-year-old struggling to find their own identity and sense of purpose. Home life was difficult. “Being a trans person growing up in a religious household” created a divide among family members that lasted years. Unable to cope, Evander spent time in and out of psychiatric hospitals, each time with a different diagnosis.

Through it all, poetry remained their sanctuary. With real life as their muse, Evander went on to represent Providence Poetry Slam as either a coach or a competitor at five national poetry tournaments and was a two-time finalist at the Capturing Fire Queer Poetry Summit, their work aimed toward “identifying, exploring, and deconstructing the stigmas found at the intersections of queer identity, Christian faith, and mental illness.” Their first book, published shortly before the start of the pandemic, challenged mental health stigmas through the eyes of a malfunctioning robot that no longer understands why it was invented, which accurately describes how Evander felt for nearly two decades.

With a newfound desire to pursue a Master of Fine Arts (MFA) in Poetry, Evander re-enrolled at CCRI in the Fall of 2021 as a Performance Theater major, once again drawn by the college’s affordability and accessibility. CCRI’s Performing Arts curriculum allowed them to explore poetry through an academic lens, which “pushed me and challenged me in new ways.”

After joining the CCRI Players as both the Treasurer and a performer and starring in the production of Something Cloudy, Something Clear, Evander soon discovered a passion for the behind-the-scenes aspect of theater, ultimately switching their major to Technical Theater. In their work as the Sound Designer in the Players’ season-ending performance of Three Years from Thirty, Evander introduced a unique soundscape that added a much-needed element of nostalgia to the final production. The freedom to discover something new and pursue it without fear of falling behind, Evander says, is a major part of CCRI’s appeal.

“I love being here,” they said. “There are so many different routes to take and it’s never too late to pivot. This is the third time changing my major. I event spent a week thinking I’d try Biotechnology. There’s room to explore, which I like.”

In addition to their studies, Evander works as a behavior therapist and writing coach, helping others who struggle the same way they once did. Having mended fences with family members and discovered a path they never knew existed through education, Evander is no longer that bewildered robot searching for its purpose.

“CCRI has given me exactly what I wanted,” Evander said. “I’m finding things that are new to me that have already been done, and now I have a whole new arsenal of things I can challenge – all new structures I have never seen before. I like to push the boundaries with my poetry. And if you know the rules well enough, you know how to break them.”