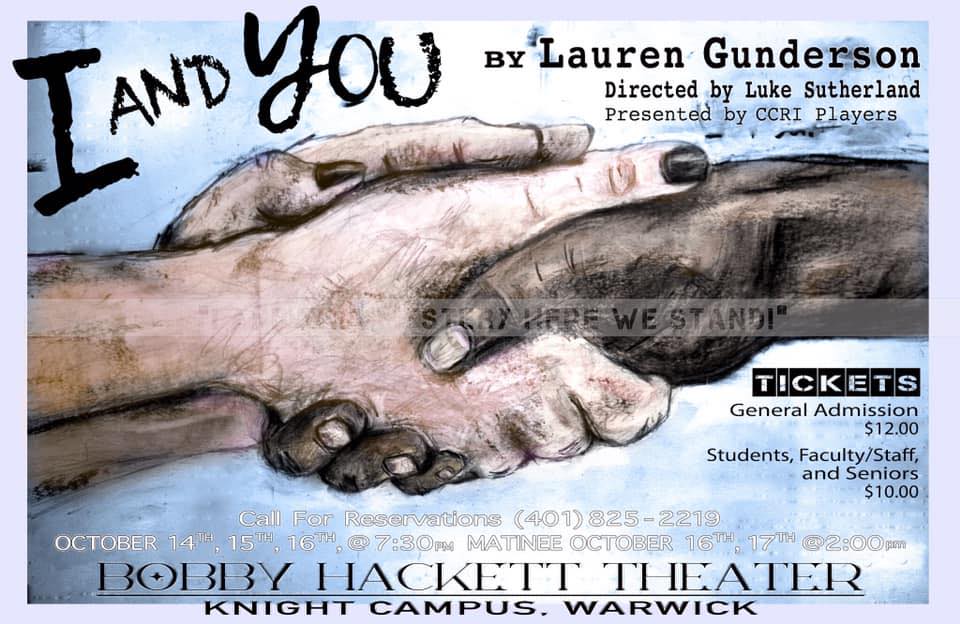 For the first time since February of 2020, the Community College of Rhode Island’s student-run theater group, the CCRI Players, will perform in front of a live audience.

The Players open their 2021–22 season with Lauren Gunderson’sI and You, directed by Associate Professor Luke Sutherland, beginning Thursday, October 14 at the Bobby Hackett Theatre. Showtimes are 7:30 pm on October 14 and 15 with a double feature October 16 at 2:30 and 7 followed by a Sunday matinee on October 17 at 2. Tickets are available at the door or online at ShowTix4U.com

Per CCRI’s COVID-19 policy, attendees will be socially-distanced inside the theater and must wear a mask at all times in addition to showing proof of vaccination or a negative COVID-19 test result within 72 hours upon entry.

I and Youis the story of two high school seniors from opposite walks of life who form an unlikely connection while working on a class project, a powerful commentary on youthful exuberance, our innate lust for life, and how two people traveling different paths can still wind up on the same road together.

Allison Wong of Barrington plays Caroline, a chronically-ill student forced to take classes at home due to her medical condition who is unexpectedly visited by Anthony, played by Ednilson Tavares of Pawtucket, the affable, outgoing star player on the school’s basketball team.

The two are assigned to dissect the poem “Song of Myself” from Walt Whitman’s Leaves of Grass and analyze the use of the pronouns “I” and “You.” Caroline, homebound for months, is as quick and sardonic – and sometimes pointlessly cruel – as Anthony is athletic, sensitive, and popular. Despite their differences, the two begin to let their guards down and share otherwise untold secrets, culminating in an unexpected plot twist Gunderson herself says is supposed to prove “pure shock and surprise.”

“This story is a heartfelt reminder of what’s at stake in life and the necessity of forming human connections,” Sutherland said.

“At first glance it would seem that these two teenagers have nothing in common but homework, or perhaps they share serious and important societal issues such as climate change, COVID-19, Black Lives Matter, and the lack of national political cooperation.

“Gunderson pays homage to the exuberance of youth, the hunger for living, and the beauty of two young people forming a human connection through friendship, kindness, and acceptance.”