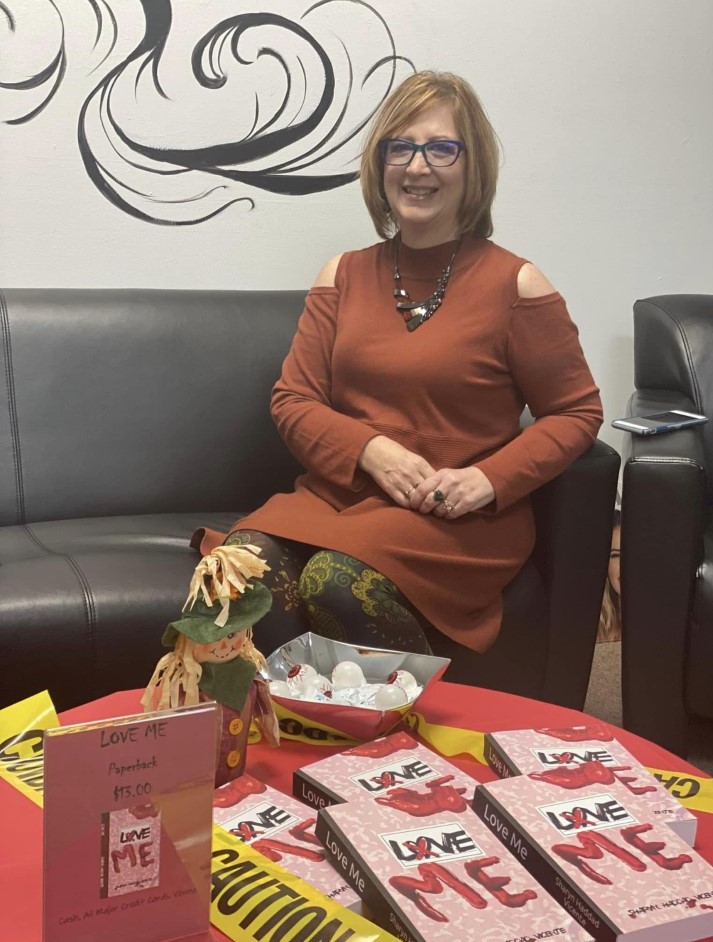 According to Community College of Rhode Island adjunct English professor and Cumberland, RI, native Sharyn Vicente, writing a book is a labor of love, so much so that Vicente often refers to her debut novel as her “third child.”

“There’s so much blood, sweat, and tears involved,” said Vicente, who recently published Love Me, a fictional psychological thriller set in Rhode Island in which a small town is tormented by a sadistic killer who leads police down a winding path of darkness and uncertainty.

“It’s a constant work in progress until you hit ‘Send.’”

Filled with vivid characters, suspenseful twists and turns, and notable references to iconic Rhode Island landmarks, Love Me takes a deep dive inside the mind of an unhinged serial killer whose struggles with personal demons showcase how “love can fracture the psyche in ways no one could ever imagine.”

As an avid reader who’s always enjoyed stories with strong, relatable characters and the lure of an edge-of-your-seat horror film, Vicente thrives in the psychological thriller genre, which is a subgenre of thriller known for exploring the psychology of its characters. The personalities in Love Me feature so many layers, Vicente said it’s not uncommon for the reader to actually sympathize with the main antagonist despite the considerable amount of bodies left in his wake.

“If you can make someone feel bad for a serial killer,” Vicente said, “you’ve done a good job.”

This 315-page cliff-hanger, which is available on Amazon as an eBook or in paperback, is the culmination of an otherwise innocent conversation between Vicente and her daughter, who more than two years ago suggested Vicente put her brilliant thoughts and ideas into words.

As a full-time Information Services Tech for the college’s Psychology department who also teaches CPR courses in addition to her role as an English professor, Vicente has always wanted to write a novel, but didn’t know when she’d find the time. She finally began Love Me in the summer of 2019, but the project stalled as other responsibilities in and out of the classroom dominated her schedule. When the pandemic hit, forcing CCRI’s workforce to transition to remote teaching and working, Vicente knew it was time to make a decision.

“I said to myself, ‘You either need to finish it or forget it,” Vicente recalled.

With extra time while working from home, Vicente fully committed herself to finishing Love Me with a goal of writing at least 1,000 words per sitting. A self-proclaimed “night owl,” she’d start at midnight and work until 2 am, often rearranging segments of the book or reimagining specific characters to make the story arc flow more consistently.

“I’m the type to put together a storyboard with ideas and then write the storylines around those ideas. Even when I’d be doing laundry, something would hit me where I’d say, ‘What if I decided to do this instead?’ and I’d sit back down and write.”

After numerous edits, rewrites, and enhancements, Vicente officially published Love Me in July. The paperback edition features a glowing review on the back cover from mystery/suspense author Heather Young, one of Vicente’s many influences. With plans to expand the first novel into a series (she has already begun working on the newest edition), Vicente is also offering readers a novelette, which will serve as a segue between Love Me and its sequel. The next chapter will take place in North Carolina with the main protagonist – a teenager in Love Me – now in her 30s facing a new set of challenges.

The constant development of characters coupled with new and entertaining story arcs are what keep Vicente motivated to continue writing, and the feeling of seeing her first completed novel in paperback is something that can be best described as “surreal.”

“There were many moments throughout the process where I wondered if this would really happen,” she said. “The end result is so rewarding. To hear people who’ve read it talk about the Rhode Island references and the landmarks, or tell me their favorite parts of the book, it’s cool to experience that. I wanted to create something I felt was relatable, and I’m so happy with the feedback.”

Vicente will sell and sign copies of her book at the 9th Annual Rhode Island Author Expo at the Warwick Crowne Plaza this Saturday from 9 am–3 pm.