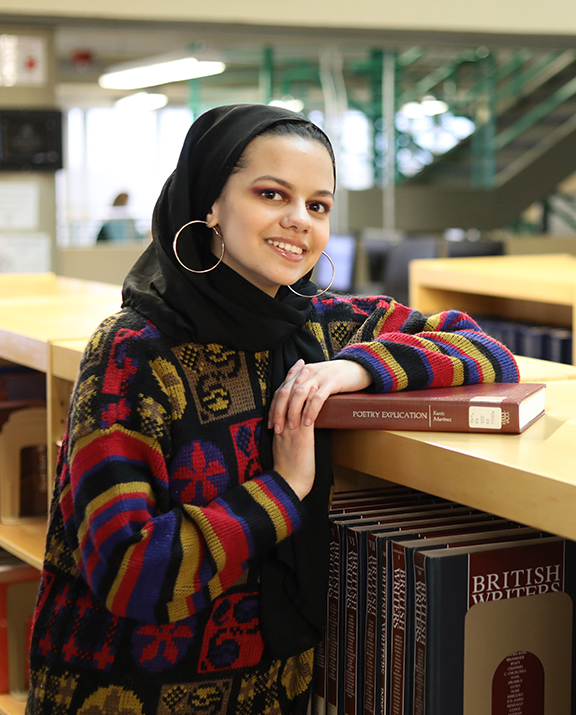 Forced to deal with unexpected adversity as a teenager, first-year Community College of Rhode Island student Halima Ibrahim found an outlet through poetry, using her words to express what she didn’t always have the strength to say out loud.

Now the 17-year-old East Greenwich resident and Rhode Island Promise scholar is teaching others the power of the written word as the state’s new Youth Poetry Ambassador.

Appointed through the Rhode Island Center for the Book’s Youth Poetry Initiative, Ibrahim is only the third such ambassador in the state’s history, tasked with helping others who’ve walked in her shoes become more comfortable with themselves and their voices through poetry.

The concept is familiar to Ibrahim, whose bouts with Lyme disease and chronic inflammatory demyelinating polyneuropathy (CIDP) from high school through now elicit a range of emotions she still sometimes struggles to process. She began writing in eighth grade and hasn’t stopped yet. As a Muslim who lived in her father’s homeland of Egypt during the Arab Spring protests, poetry has also fueled Ibrahim’s passion for activism. Her work covers a variety of topics from illness and gun violence to race and Islamophobia.

“Poetry is therapy, but it’s also education,” Ibrahim said. “It keeps my brain working and allows me to get my emotions out.”

Ibrahim’s winding journey has led her to CCRI, where she is currently enrolled as a Promise scholar studying Fine Arts with the ultimate dream of earning her PhD in Art History.

In addition to her role as the state’s Youth Poetry Ambassador, she is also active within the March for our Lives Rhode Island movement as one of its founding members, the RI Womxn’s Action Initiative – formerly the RI Chapter of the Women's March on Washington – and the Rhode Island Coalition Against Gun Violence. Poetry is the backbone of her activism; in 2018, she performed her poem, “Wake Up,” in front of a crowd of more than 7,000 at the March for Our Lives rally at the State House. Since then, she has become a respected voice among youth activists within the community, sharing profound, thought-provoking poems at various rallies.

Having experienced racism – and even gun violence – first-hand, Ibrahim’s words reflect her life experiences, and her passion for poetry, coupled with her ability to relate to young teenagers, made her a logical choice to become the state’s youth ambassador.

“With poetry, I’ve been able to make people listen to things that people don’t necessarily want to listen to,” Ibrahim said. “Teens have ideas and topics they’re not always comfortable talking about because they don’t think they’re going to be listened to. They don’t think their voice is important enough. Poetry is a good way to get people to listen and also help them develop their voices to gain more confidence.

“My biggest goal is to make sure young teenagers know their voices.”

Ibrahim’s transition from a shy, withdrawn teenager to an outspoken youth advocate began within the confines of her home while struggling with an illness that eventually forced her to withdraw from high school.

The symptoms began in middle school when she had trouble concentrating on assignments and moving her legs in class. Her parents tried homeschooling, but her conditions worsened, often leaving her bedridden for days – sometimes months – at a time. Adverse effects from her medication, primarily spinal fluid buildup, further sidetracked her education. Forced to use crutches for long stretches at a time, Ibrahim kept herself sharp by reading books and writing poetry. When her symptoms finally subsided, albeit temporarily, in early 2019, she decided to focus on completing her GED with the intention of enrolling at CCRI as a Promise scholar.

“It was an opportunity I couldn’t pass up,” she said.

Ibrahim is now living her dream of attending college, which would not have been possible without Rhode Island Promise. Three days after completing her final GED exam, Ibrahim began her first semester at CCRI. With help from the college’s Disability Services for Students (DSS) office, she missed only three days in the fall due and finished with a 3.94 GPA. Weekly infusions of IVIG, or immunoglobulins, through a port-a-cath help heal her nervous system and allow her to focus in the classroom.

She hopes others will have the same opportunity to attend college and continue their education through the Promise scholarship.

“It needs to become a more widely-accepted option,” Ibrahim said. “I don’t like to think about ‘What Ifs,’ but I’m thankful for Rhode Island Promise. This was meant to be. I still wake up some days unable to walk, and I still have crutches, but my professors are understanding and Disability Services has been wonderful. I’m receiving a quality education at CCRI and it should be a viable option for everyone.”