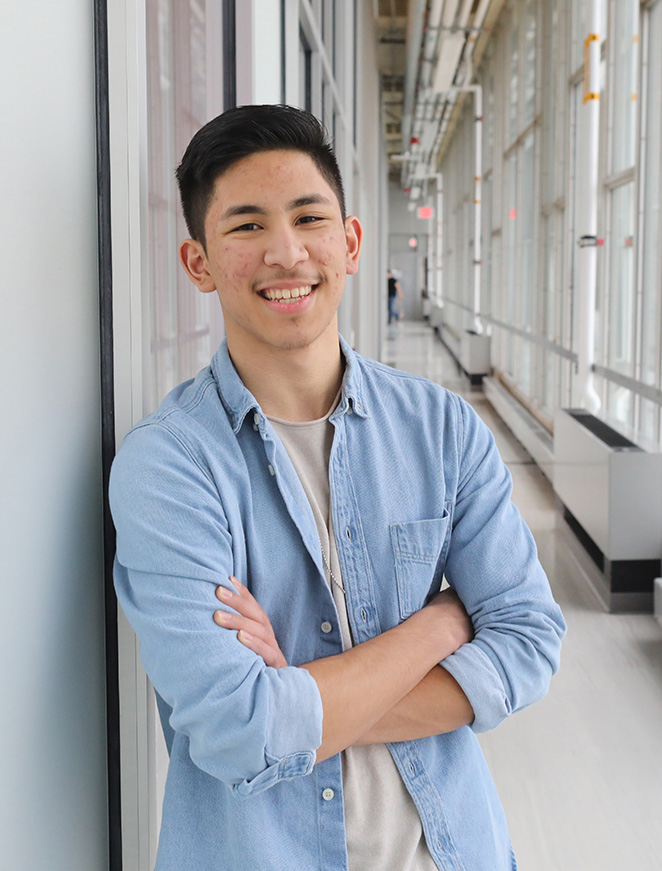 As a child fascinated with electronics and gadgets, one who spent time taking things apart and putting them back together, Cesar Vasquez Arita always knew he wanted to be an engineer.

The son of two immigrant parents from Central America, money was often tight in Arita’s household. His parents worked tirelessly to provide for the family – a genuine source of motivation as he grew into his teenage years – but Arita wasn’t always sure he’d have the means to pursue his dream job.

“I looked at computer engineering as this unreachable, almost inaccessible, major,” he said.

Thanks to the Rhode Island Promise scholarship, Arita’s goal is now well within his grasp. Currently in his second semester at the Community College of Rhode Island, the 19-year-old Arita is on the path to success majoring in Computer Science with the intent to transfer to a four-year university in 2021 to continue his education.

“I’m really thankful. That’s the best word I can use,” Arita said. “God knows the hardships that I would have had to go through if I didn’t have Rhode Island Promise.”

Growing up in a working-class family, Arita understands the value of education. His father worked in construction most of his life while his mother, also born in Honduras, held a variety of odd jobs, from housekeeping to sales, to help make ends meet. The two inspired Arita to chase his dreams knowing they didn’t have the opportunity growing up to pursue theirs.

“They always told me that as long as I had the determination and motivation to study something, no matter what it was, I could succeed,” he said.

“That’s something I admired a lot about them – the hard work to push through the odds and still have their kids go to school. The constant motivation to better yourself, that mindset of never settling, that’s the most important thing I learned from my parents.”

With a goal in mind, yet still some lingering doubt as to whether or not engineering was right for him, Arita attended the Providence Career & Technical Academy, a vocational school located just a stone’s throw from Classical High School. At PCTA, Arita took advantage of an internship opportunity to work with engineering professors and undergraduates at Brown University. They designed a drone, developed the software, built the prototype and then flew the finished product as part of a trial run. Working side-by-side with professionals in the industry further motivated Arita to pursue engineering as a career path.

“That project is what really gave me the clarity I needed,” he said. “Not everyone gets the chance to say they worked with undergraduates at Brown. It was a unique opportunity, and vocational school allowed me see for myself if this what I wanted to do before I enrolled in college or spent money on my education.”

Tuition costs remained a considerable hurdle as Arita began considering his options after graduating from PCTA. Upon the recommendation of his high school guidance counselor, he enrolled at CCRI as a Promise scholar to utilize his two years of free tuition to get a jump start on his education.

The transition has been seamless; Arita thrived in his first semester by taking advantage of the college’s various resources, including the Success Center and the Advising and Counseling Office. With his confidence at an all-time high, he is recruiting fellow students in his major to launch a Computer Science Club at CCRI, which would allow him, and others, to continue networking and sharing ideas.

“Coming from an immigrant family, paying college tuition while you’re just trying to help out or get through the month can be difficult,” Arita said. “Rhode Island Promise is a way for me to help my parents.

“My experience at CCRI has been great,” he continued. “The classrooms are small and intimate. I can approach a professor for extra help without any problems. There are so many different support systems here.”

With a three-year-old brother at home, Arita continues to push himself in the classroom knowing he may one day have the power to influence others. Rhode Island Promise has changed his life and given him an opportunity his parents didn’t have when they were growing up. He hopes future high school graduates and college hopefuls – perhaps even his brother – can benefit from that same opportunity.

“Imagine having children who don’t have the resources, but want to go to college and continue studying. Rhode Island Promise is something that says, ‘We support you. Here is what you can do to keep moving forward,” Arita said.