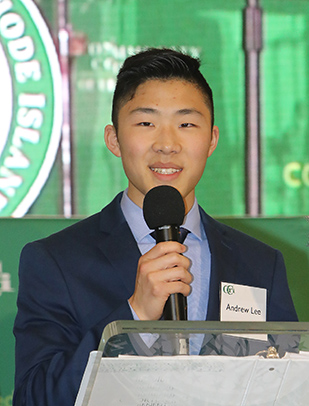 In his final year at the Community College of Rhode Island, Knight Campus Student Government President Andrew Lee has fully embraced his role as the “voice of the students” with a goal to make sure not only his administration runs as smoothly as possible, but that future campus presidents enjoy similar success.

“I want to come back in five years and see that there are a lot of clubs – a lot of members. I want to see double the amount of clubs,” said Lee, a Coventry native and Rhode Island Promise Plus scholar. “This year, my term is really about rehabilitation. I want to make sure next year, whoever is the president and whoever is in our cabinet, they know what to do and are prepared to do what they need to do.”

The first few weeks on the job have been a whirlwind; Lee also works as a waiter at Spain of Narragansett and is participating in this year’s College Leadership Rhode Island program, balancing life in and out of the classroom as he works toward completing his associate degree in Business Administration.

A member of the Joint Admissions Agreement (JAA) program, Lee will transfer to a four-year university next fall to continue his education. His “dream job,” as he calls it, is to one day work as an executive at an investment firm, a goal he says is a “little farfetched” for now, but certainly not unattainable – at least not for a bright, goal-oriented student like Lee whose desire to keep learning makes him a perfect fit for a leadership role in Student Government.

Since starting his presidency this fall, Lee has gained valuable experience handling assorted issues raised by individual students – from handicapped parking to accessibility on campus – while remaining steadfast toward accomplishing the goals he outlined during his campaign, a complex balancing act that has helped him appreciate the responsibility that comes with his new role.

Lee’s goal is to increase engagement on campus by promoting and assisting in the development of new clubs. Last year, he helped organize a ping-pong tournament in the Great Hall to collect donations for the Food Pantry and will do the same this year in addition to working on the launch of an LGBT community as part of his initiative to make sure all students feel welcome and have a voice on campus. Lee also plans to start a community garden where students can learn about agriculture while growing produce to donate to the Food Pantry or other organizations in Rhode Island.

His desire to build a stronger sense of community at CCRI comes from his own struggles to get involved both in high school and during his first few weeks of college. Lee needed a push to realize his full potential. Joining Student Government lit the spark that eventually nudged him toward becoming Knight Campus President.

“I was just really quiet,” Lee said. “I was like everyone else. I just stuck with a small group of friends and just did my homework. After getting involved with Student Government last year, I talked to so many different people and realized you can gain something from every single person. I really liked that. It opened me up. It’s developed me because I’m able to talk to all different types of people.”

Lee is also taking on the responsibility of establishing a more concise set of guidelines and policies for future members of Student Government in order to streamline the event-planning process. This, he says, will make it easier for students or clubs to work with various vendors and departments on campus when organizing a specific fundraiser or meeting.

Lee continues to put his best foot forward as an advocate for his fellow students while keeping a watchful eye on the future.

“I get so many emails about real issues – random stuff that may be in the back of your mind, but can become a huge issue, so I realize it’s something I have to prioritize,” he said. “We have a lot of diversity on campus and students that represent a lot of groups, so we have a decent amount of events planned for this year that I think are important and vital to the community.”