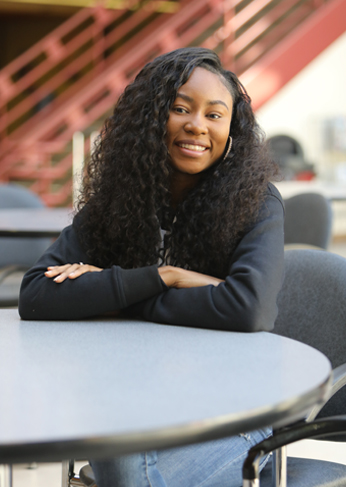 Remi Jones had no idea what she was about to get herself into.

With no television experience whatsoever, the 32-year-old Providence native and Community College of Rhode Island student, stepped into the studio of Video City TV in New York last year to record a drop – an industry term for a short clip or soundbite – at the behest of her close friend, a host at the network who thought Jones’ personality would translate well on camera.

“I was scared,” Jones admitted. “I didn’t even know what a drop was.”

Fate outweighed fear that night, and Jones promptly nailed her line on the first try, turning the entire room on its ear.

“They told me no one ever does it in one take or does it perfectly,” she said, “but I did.”

Until then, Jones had no desire to become a media personality. She wasn’t entirely sure what she wanted to do with her life. After trying her hand at fashion merchandising nearly a decade ago, Jones worked a series of minimum-wage jobs for the next 10 years until her uncle persuaded her to go back to college. In 2017, she enrolled at CCRI and took an interest in the legal field after completing an online questionnaire that matched her personality traits to that specific profession.

Jones went all in and will earn her associate degree in Paralegal Studies this fall as a first-generation graduate, but that impromptu rehearsal in New York changed everything.

Within the past year, Jones has emerged as the face of Remi TV, an online media platform in which she conducts interviews with celebrities in addition to up-and-coming actors, musicians and entrepreneurs, giving them the opportunity to express their ideas and promote upcoming projects.

After discovering her hidden talent as a broadcaster, Jones began dipping her toes in the water as a part-time correspondent for Video City, landing her first assignment in 2018 interviewing Grammy award-winning R&B singer Mýa, who, coincidentally, had become a friend of hers over the past decade through a mutual connection. Jones didn’t even have her own camera crew – just a friend recording with an iPhone. She went on to cover a series of red-carpet events for the network before deciding to start her own company.

“I eventually said to myself, ‘Why don’t you do your own show and make your own brand?’” Jones said. And with a strong belief in herself and a passion for entertainment, Remi TV was born.

Even with her experience at Video City under her belt, the launch of Remi TV was – and remains – an extensive grassroots project for Jones, who moonlights as her own booking agent, host, social media coordinator and public relations specialist. She started by soliciting local professionals in the industry willing to help with the project, enlisting Providence’s Stanley Bois – co-creator and CEO of popular nightlife website HotInRI.com – as her cameraman and video editor. Committed to earning her degree, Jones spent her days in the classroom and most of her nights reaching out to celebrities for interview requests.

A lot of them declined at first, and some didn’t reply at all, but Jones’ small body of work and growing popularity on social media had legitimized her to the point where she landed a few major players to help get the network off the ground. In December of 2018, she officially debuted Remi TV with an exclusive interview with Sirius XM host and hip-hop legend DJ Kay Slay.

“He said to me, ‘I gave you a chance because I personally feel like you could be the next Oprah and I don’t want to miss out on the opportunity of me being interviewed by you,’” Jones said. “He knew how tough it can be for people of color to run their own business and do what they want to do, so he gave me a shot.”

The segment went viral, helping Jones land additional interviews with well-known artists, including Wyclef Jean, rapper and producer Havoc of Mobb Deep, and a second interview with Mýa. She also launched her own website and now has close to 6,000 followers on Instagram as her popularity expands. People notice her in public, whether at the gym or while networking at nightclubs.

Despite her newfound success, school remains a priority; in addition to finishing her associate degree, she is also taking courses in communications and public speaking while working as a secretary at the Liston Campus.

“I love school and I love the Providence campus,” she said. “Everybody is friendly. Everybody cares about you, especially the professors. It’s like a family here.”

Balancing Remi TV with school is a non-stop hustle for Jones, summed up perfectly by the slogan, “The Grind Has No Curfew,” proudly displayed on the sweatshirt worn in several of her interviews – a reminder of the work it’s taken to get this far in a short amount of time.