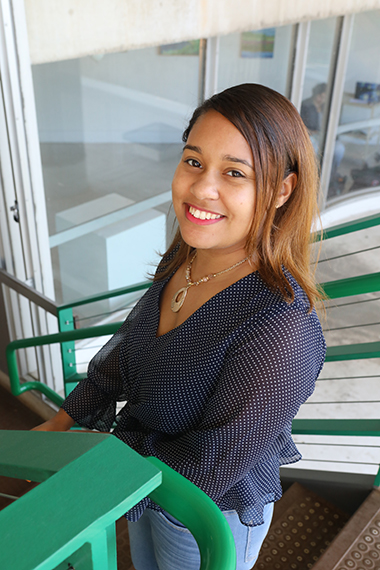 As a first-generation college graduate who took advantage of all the resources available to her on campus, CCRI alumnus Mileiry De La Cruz is now pursuing a career in a field designed to help students just like her reach their full potential.

The Providence native discovered her passion for helping others while enrolled at the Community College of Rhode Island. Under the guidance of the college’s Access to Opportunity and Joint Admissions Agreement (JAA) programs, De La Cruz flourished as a Student Ambassador, graduating in 2018 and transferring to Rhode Island College the following fall. Now a member of the nationwide Ronald E. McNair Achievement Program – aimed toward helping first-generation and low-income students transition to graduate school – De La Cruz will pursue her master’s degree in Higher Education Administration upon graduating from RIC next fall.

The JAA program at CCRI is what really laid the foundation for De La Cruz, who admits she’d have been “pretty lost” trying to navigate through the college process on her own.

When she arrived at CCRI three years ago, she had no career choice in mind until she got involved on campus, both as a Student Ambassador and student worker in the college’s Enrollment Services office. She initially wanted to pursue Diagnostic Medical Sonography, but her work as an ambassador ultimately sparked her interest in higher education. De La Cruz soon met with Vice President of Student Affairs Sara Enright and Advising and Counseling Director Lisa Mallozzi, who introduced her to JAA.

The program simplified the transfer process for De La Cruz by helping her identify what field of study she wanted to pursue at a four-year college and then guiding her down the right path to ensure all of her credits would be transferrable. Students who participate in JAA also receive counseling each semester from advisors at both CCRI and their four-year college of choice in addition to a tuition discount by graduating CCRI with a 3.0 grade point average or higher.

“JAA gives you peace of mind knowing your credits will transfer, keeping you on the path to a bachelor’s degree.  And, the advisors helped keep me you on the right track,” De La Cruz said.

De La Cruz ultimately chose to major in Communications at RIC with a concentration in Public and Professional Studies, which, she says, will help her once she gets into the field because she will need to be able to communicate effectively with students.

“If it wasn’t for JAA and my advisors, I would not have chosen a Communications degree.  They helped me understand how it would help with my future goals. They were truly invested in my education and my future. It was the extra boost I needed.”

De La Cruz is applying to several graduate programs to begin the next phase of her journey with the ultimate goal of one day working in higher education, where she can assist similar low-income, first-generation students adjust to college life.

De La Cruz is confident her background will help her relate to students who need help along the way, specifically those who are afraid to ask for it or aren’t comfortable stepping out of their comfort zone. She’s the perfect example of a student who has continued to persist with her education, and remains appreciative of her time at CCRI, which forged her path to success. “What I’m doing now is a reflection of the lessons I learned and the people I met at CCRI, who always believed I could achieve success,” De La Cruz said. “My future is built upon the strong foundation I found at CCRI.”

In addition to being a full-time student, De La Cruz also works part-time as a bilingual customer service specialist at the Santander Bank Call Center in East Providence.