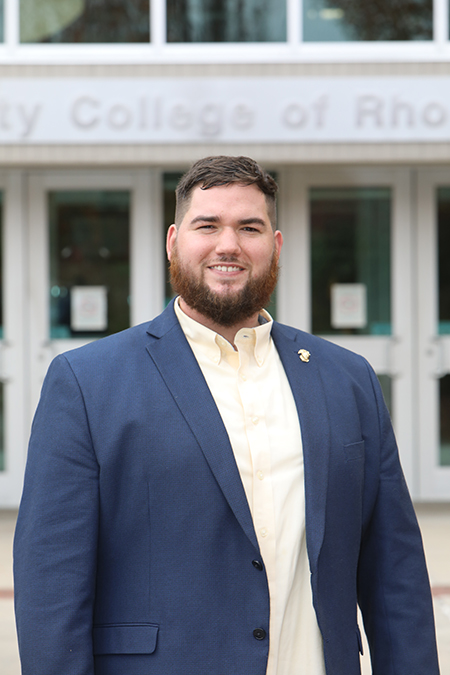 Two years removed from his final deployment in the Philippines and less than a year removed from a life-changing journey to heal from within, Jacob Travis wakes up each morning knowing his story can benefit others who’ve walked in his shoes.

A former United States Marine, Travis is in his first semester at the Community College of Rhode Island pursuing an associate degree in Business with the dream of one day working with fellow veterans to ensure they get the help and guidance they need to successfully transition back to civilian life.

“I’m blessed to be in this position. I’ve been through the hardships and I’ve made it out, even when there were times I didn’t think I would,” Travis said. “Not everyone is as lucky. Now I have such a different outlook on life.”

Since enrolling at CCRI this semester, the 25-year-old Cranston native has hit the ground running, studying full-time for his associate degree in addition to reviving the college’s Student Veterans Organization chapter – dormant since 2015 – as the new president under the guidance of CCRI’s Veterans Resource Coordinator Denny Cosmo. He’s also participating in two business research projects and working at the college’s Veterans Services Office through the VA’s work-study program. The next step is to graduate CCRI and transfer to Bryant University to major in Leadership and Innovation Management with a minor in Psychology.

“When I first met Denny, he laid out all the potential opportunities for me within the Veterans Services Office, but told me, ‘It’s all on you,’” Travis said. “I said to myself, ‘I’m going to do this legwork because I care about this and I want to be like that guy,’ so that’s what I’ve been doing. It’s been an amazing experience.”

Travis wasn’t always this focused or goal-oriented. A third-generation Marine, he grew up with both parents – his father was a successful international businessman following his discharge from the military – and an older brother, but bounced between high schools due to his self-admitted lack of interest in the curriculum. Problems at home weighed him down. He tried his hand at Cranston West High School’s vocational program as a junior before returning to Cranston East the following year, where he was forced to make up 17 credits online in order to graduate on time.

Having been raised by a former military sergeant, Travis didn’t lack discipline. He lacked drive. He sought counseling as a teenager in an effort to find an outlet for his emotions, but the sessions merely scratched the surface. He originally enrolled at CCRI in 2012, but lacked the focus and desire to succeed. He needed a change of pace. He felt “trapped” in Rhode Island, so, at 19, he packed his belongings and moved to Beaufort, SC, to live with his aunt and uncle and their three daughters.

Within weeks, Travis signed up for the Marine Corps, following the family tradition. Military life provided the structure he lacked at home.

“It was a huge wakeup call, and I gave in to the transformation,” Travis said. “I really wanted to dive in and be a Marine and change as much as possible.”

Travis soared through boot camp, graduated as Private First Class, and landed a role as an Ammunition Technician Specialist, dealing with all forms of ammunition from explosives and artillery rockets to pyrotechnics and small firearms. He served two deployments, both in Okinawa, Japan, and Marawi, Philippines, working with foreign armies and weapons disposal units. Following his final deployment, Travis served as an Explosives Chief at 2nd Law Enforcement Battalion at Camp Lejeune in North Carolina, a more traditional “desk job” in which he tallied ammunition inventories and briefed battalion commanders. He also earned a Navy Marine Corps Achievement Medal from the Secretary of the Navy.

Though he wasn’t stationed in a combat zone, the effects of serving overseas caught up with Travis following his honorable discharge in August of 2018. He had trouble reacclimating to the civilian lifestyle, a common struggle for military veterans. He felt he lacked a “sense of purpose.” He began drinking heavily and was eventually diagnosed with depression. He contemplated suicide.

“In the Marines, I was used to having someone tell me, ‘This is what needs to get done,’ and I’d make sure it got done. Then you get out and you think, ‘I have nothing to do right now,’” Travis said.

“I hit a real low point in my life. I had spent all my life and invested all my time and energy into becoming a Marine. I put everything into it. My purpose in life was to be a Marine. Then I get out and I’m like, ‘I have no purpose.’”

An automobile accident in which Travis says he was “lucky” to survive was the final wake-up call he needed to seek help. Instead of his original plan of returning to CCRI in the spring of 2019, he spent six months at North Cottage, a substance abuse treatment facility in Norton, MA. He’s now one year sober with a new lease on life and, more importantly, an unrelenting drive to help others who’ve traveled the same path, many of whom, he says, don’t realize they have a problem.

“There are 22 veterans that commit suicide each day,” Travis said. “There are also more than 300 veterans within our four campuses. We’re just beginning to skim the surface.

“I’d like to open up the Student Veterans Organization to everyone,” he continued. “Next semester, I’m going to each of our campuses for face-to-face time with our student veterans. We know how to help people. We have a passion. There’s something instilled in each one of us that drives us to continue serving for the greater good. I want to help people not make the same mistakes I made.”