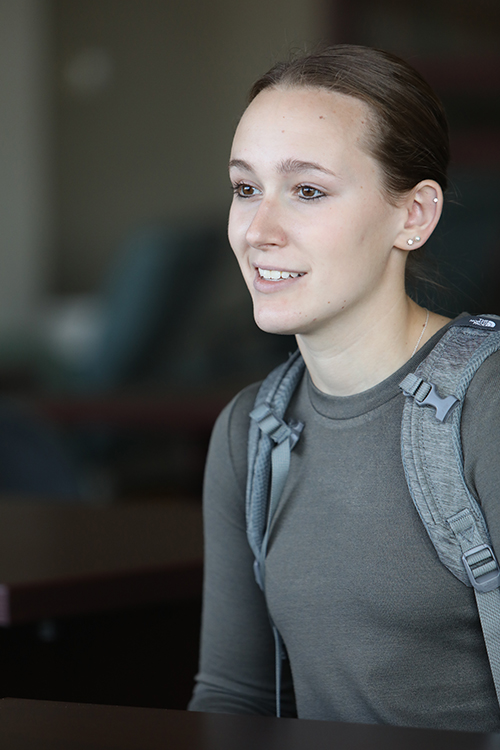 Most people who meet Karly Marchand would never guess she served in the United States Army. Quiet and unassuming, the 22-year-old Glocester resident blends seamlessly with fellow first-year students at the Community College of Rhode Island.

“Even my mother, she tells me all the time now, ‘I still can’t believe you did it. That’s not you!’” Marchand says.

Two years ago, Marchand faced a major crossroads. She was in her second year at Johnson & Wales University, having already switched majors several times, from Fashion Merchandising to Accounting, followed by Sports, Entertainment and Events Management. From there, she segued into wedding planning, transferring as a sophomore from Providence to JWU’s campus in Charlotte, NC.

Marchand interned for an independent wedding planner in between classes in Charlotte, and while she enjoyed the business, she wasn’t quite set on it as a career. Plus, the cost of tuition and the impending debt she’d face after graduating remained a concern.

“I was just trying to find the right fit,” she said.

Determined to change her trajectory, Marchand left JWU and enlisted in the U.S. Army in January of 2017, six months shy of her 20thbirthday.

The plan was to serve in the U.S. National Guard, but less than a week before she finished basic training, she got the call for her first and only deployment.

Some wait years to get that call, and some never get it at all, but, within 10 months of enlisting, Marchand deployed to Kuwait, where she worked in the Army’s maintenance unit processing inventory and ensuring vehicles were properly repaired. Seven months later, the Army sent her to Iraq, an environment she described as hot and hazy, with very little sunlight. Stationed near a combat zone, Marchand worked on a military base separated from civilians by reinforced concrete T walls, designed to absorb the impact from low-flying trajectories, such as missiles, or small firearms.

“It was nerve-wracking,” she said. “We were in a constant state of never knowing what would happen next.”

Serving overseas, meeting new people and seeing the world opened new doors for Marchand and helped shape her plan for the future.

She returned to Rhode Island in September of 2018, just a few weeks after the start of the first semester for most college, and soon discovered CCRI’s Emergency Management and Homeland Security program, which piqued her interest because of the variety of potential careers within the field. Now in her first semester at CCRI, she is also in the process of reenlisting in the National Guard for six more years, inspired by the people she met and the friendships she developed serving overseas.

“Just like the Army was the right move for me, so is CCRI,” Marchand says. “When I saw the college offered a program for Emergency Management and Homeland Security, I thought to myself, ‘That is exactly what I want to do.’”

CCRI’s flexible schedule allows her to attend class full time while working weekends at the National Guard and at T.F. Green Airport as a ramp agent for American Airlines. She’s also thankful for the support from CCRI’s Student Veterans Organization, which helped her with her initial paperwork in addition to finding the right options for using her GI Bill®.

Marchand recently discovered the veterans’ lounge at the Knight Campus, too, where she has met fellow veterans with similar experiences who relate to what she went through readjusting to the college lifestyle.

“I definitely couldn’t do this by myself,” she says.

Now, with a lifetime of valuable experience behind her, and the support from CCRI’s veterans’ community, Marchand is one step closer to finding her perfect fit.