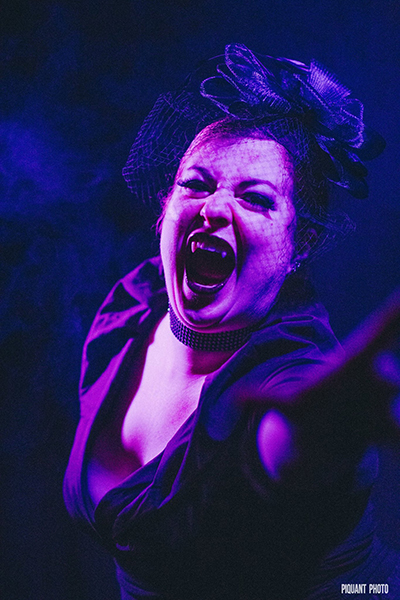 The Community College of Rhode Island Players hosts its first Guest Artist Series of the 2019–20 season this week at the Knight Campus’ Bobby Hackett Theatre, featuring two original horror productions from the OUT LOUD Theatre in Providence.

This limited run of OUT LOUD’s “Creature Double Feature” begins Thursday, November 14 with Creation X,which focuses on a scientist forced to confront her own humanity when her experimental “monster” escapes from its containment, and continues Friday, November 15 with Immortal Thirst, a story of an aristocratic family whose societal clout and interpersonal dynamics begin to unravel when pitted against an illustrious countess.

Showtimes for Creation Xare Thursday at 7:30 pm followed by a 2 pm matinee on Saturday, November 16. Immortal Thirstruns both Friday and Saturday at 7:30 pm. Tickets are $12 with a discounted price of $10 for CCRI students, faculty, staff and seniors and are available by calling 401-825-2219.

The CCRI Players have worked with outside production companies in the past, primarily under the college’s former Charles Sullivan Fund for the Arts and Humanities, but this month’s joint effort with OUT LOUD bring a new feel to the theater program, according to Associate Professor and coordinator Ted Clement, in that it’s the first Guest Artist Series launched directly by the students.

Last year, the Players teamed with the Seed & Ivy Theatre Co., for a one-time production of Bedtime Storiesin conjunction with CCRI’s programming for Sexual Assault Awareness Month. Clement hopes reviving the concept of collaborating with outside theater companies and making it a part of the annual season will provide CCRI’s Technical Theater students with much-needed real-world experience.

“When we did this last year, it was a really rewarding experience,” Clement said. “The students learned what it’s like to work for a hosting theater, such as the Providence Performing Arts Center or the Wang Center, which are venues devoted exclusively to hosting tours. The practical purpose is to provide them with the opportunity to load in a show, host the event, execute the production and then load it out. It’s a really important skill for these students to learn because many of them will be working at hosting theaters.”

The “Creature Double Feature” features the original works of Adjunct Professor Kira Hawkridge, who co-founded OUT LOUD in 2012 with Barrington native Siobhan LaPorte-Cauley, the co-director of Creation Xand lead role of The Contessa in Immortal Thirst. The “Creature Double Feature,” part of OUT LOUD’s Devised Theatre Tour, also includes creative workshops at the Bobby Hackett Theatre on Thursday and Friday from 5–6 pm in which cast members and producers interact with viewers to discuss how both plays were conceptualized and designed. Both productions are written and performed exclusively by members of the OUT LOUD ensemble.

“OUT LOUD is thrilled to collaborate with CCRI and to support its initiative to teach their students how to promote and produce touring shows,” Hawkridge said. “We have a unique way of approaching a tech process that is highly and often radically collaborative. It has been a wonderful experience working with the CCRI students on promoting and producing this double feature and we hope it has been an exciting learning environment for all involved.”