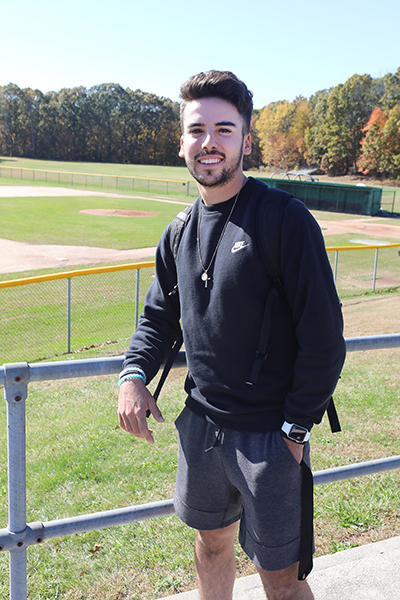 As far back as high school, CJ Casalino had a game plan for pursuing a career in the healthcare industry.

With help from the Community College of Rhode Island’s Running Start and Rhode Island Promise programs, the Bristol, RI, native is on the right path to achieving those goals faster than most students his age.

The 19-year-old Casalino, both a Promise scholar and infielder for CCRI’s baseball team, dreams of one day becoming a chiropractor, following in his father’s footsteps.

According to the Association of Chiropractic Colleges, most institutions – with the exception of those that require a bachelor’s degree – require at least three years of undergraduate education, or 90 credits, for enrollment.

Whereas most undergraduates would have to wait until after high school to get started on the next step, Casalino already has a leg up on his peers after participating in Running Start, which allowed him to take the first 30 of the required 90 credits as a high school senior. The Promise scholarship offers him the added flexibility of completing the next 60 tuition-free, eliminating the burden of repaying student loans or accruing debt.

With a clear goal in sight, and the right guidance from CCRI, Casalino is well on his way to earning his Associate Degree and getting a jump start on chiropractic college before his 21stbirthday.

“CCRI has been awesome,” Casalino said. “The Running Start program gave me the opportunity to get 30 credits completed in my senior year of high school before I even enrolled in college. Having that extra year really gave me a head start and helped me transition to becoming a full-time college student.

“I always recommend CCRI to students like myself. If you are interested in attending a four-year college, why not start at CCRI to get the college experience? With your associates degree, you can transfer anywhere. It’s a great option financially and the professors here always go above and beyond to help you out when needed. It’s been a great experience for me.”

Although his father never pushed him toward a career as a chiropractor, or even in sports, Casalino developed his own interests in anatomy and the human body from spending time with his father on the job. “I was intrigued by the mechanics of it,” he said, which eventually inspired him to choose the same career path.

Casalino has always been a self-starter, even with baseball. He began playing at a young age, starting out like most children do in Little League. He started as both an outfielder and third baseman for Mount Hope High School’s varsity team for four years, playing summer ball in between.

“I’ve always loved the sport. It just came natural to me,” Casalino said. “Coming to CCRI was the right choice for me in a number of ways, both from an academic standpoint and for baseball. This program allowed me to play right away, compete for a role and contribute to the team. I’m looking forward to my sophomore season.”

Casalino excels off the field as well, working part-time as an umpire and baseball instructor at 365 Sports RI in Warren while forming strong relationships in the classroom with his professors, including Assistant Biology Professor Paul Miele, who is also a chiropractor. Casalino’s father actually worked at Miele’s practice years ago upon moving to Rhode Island until he was issued his own chiropractor’s license.

“He’s a hard-working student,” said Miele, who taught Casalino in his anatomy class. “He’s very goal-oriented and understands the profession and what it does. He knows it’s more than treating back pain; it’s an alternative to treating a lot of health issues. He understands that. He was especially focused when we studied spinal and neuromuscular skeletal topics, he was very focused. That plays a big in what he will do in life. He grasped that, and that’s why he did so well.”

Casalino is targeting several chiropractic colleges for 2020, and his timing couldn’t be better. CCRI’s commitment to helping students complete their required credits and earn their degrees faster and more cost-effectively through programs like Running Start and Rhode Island Promise ensures students similar to Casalino can cross that finish line.