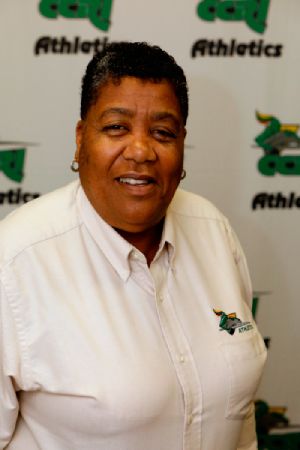 Community College of Rhode Island Athletics Compliance Officer Bev Wiley, a trailblazer for gender equity in sports, is one of 13 honorees selected for the YWCA Rhode Island’s 15th annual “Women of Achievement” Awards.

Established in 1858, the YWCA is a non-profit organization dedicated to eliminating racism, empowering women, standing up for social justice and strengthening communities while providing cultural, educational and recreational programs for women, girls and young children. Each year since 2005, the YWCA has selected its “Women of Achievement” from each state, recognizing women whose accomplishments span the fields of industry, culture and public service. The entire YWCA Rhode Island field will be honored at this year’s awards luncheon November 14.

“I was humbled and flattered at the same time,” said Wiley, also a former YWCA Rhode Island Greater board president in the 1980s. “I am forever grateful.”

Wiley’s accomplishments on the local and national sports landscape span decades, from rebuilding CCRI’s softball program into a regional powerhouse in the mid-2000s to serving in a variety of roles for USA Softball, including her current position as State Commissioner.

“We are so proud of Bev on this well-deserved honor,” said CCRI President Meghan Hughes. “For years, she has played an integral role in the success of our student-athletes, both in and out of the classroom, as an advisor, coach and role model. She works tirelessly to enhance gender equity at all levels and gives so much of her free time to create opportunities for women in athletics so that they, too, can become leaders within their community.”

Through the years, Wiley has remained involved with athletics both on and off campus and has earned numerous awards and recognitions. As a philanthropist, public address announcer, and pioneer for women’s sports, she is widely considered a role model among female student-athletes for her accomplishments at all levels.

A former player, coach and umpire, Wiley was selected Commissioner of USA Softball Rhode Island – the state affiliation of softball’s national governing body – in 1992, becoming one of only 10 female commissioners in the organization out of 99 associations nationwide in what was then, Wiley said, a “male-dominated” sport.

“I wasn’t going to apply, yet I remember thinking, ‘I’m always encouraging women to get involved, so I should at least throw my hat in the ring,’” said Wiley, who ran the state’s female softball program for 12 years prior to becoming commissioner. “I had no expectations. Lo and behold, I was selected.

“Softball is strong in the women’s sports arena at the collegiate level and at the national and international level, yet females aren’t as represented in the leadership positions”

Twenty-seven years later, Wiley is also USA Softball’s Northeast Region Vice President with one of 19 seats on the Board of Directors at the national level. In October, she will travel to Oklahoma City for the tryout camp as part of the National Women’s Team selection committee to finalize USA Softball’s 2020 National Team, which will compete in the Summer Olympics in Tokyo for the first time since 2008.

Her tenure at CCRI began in 1999 when she replaced former coach Conrad Fecteau and turned the softball program into one of the best at the NJCAA Division II level, becoming the college’s all-time winningest coach with 108 victories and three consecutive Region XXI titles during an 11-year span. While coaching, Wiley served as a Student-Athlete Academic Support Program (SAASP) Advisor and in 2009 took on additional responsibility as CCRI’s first Compliance Officer, tasked with ensuring regulations and guidelines are followed within the Department of Athletics in addition to complying with NJCAA Title IX and gender equity policies.

“My goal has always been to make a difference and to be a role model to young people, especially women and girls, but all young people,” Wiley said. “I’ve had opportunities in my life and I want to make sure I pay it forward and provide the opportunity for others as well.”

Wiley is also the Board Chair of Women’s Fund of Rhode Island and serves on the Advisory Committee for Rhode Island Sports Commission. In 2014, Words Unlimited – the state’s organization of sportswriters, sportscasters and publicists – honored Wiley with its Amby Smith Lifetime Achievement Award. She also serves as President for the Rhode Island Association for Intercollegiate Athletics for Women (RIAIAW) and is a former trustee of the CCRI Foundation.

The awards luncheon is November 14 from 11:30 a.m. – 1:30 p.m. at Kirkbrae Country Club in Lincoln. Tickets are available online at www.womenofachievementri.org.