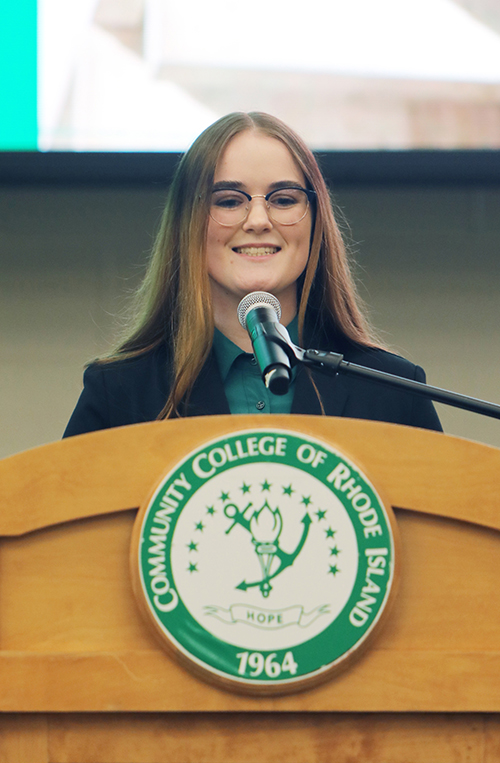 As she begins her new role as the Student Government President of the Community College of Rhode Island’s Newport County Campus, Madeline Holden wants every student who walks through those doors to feel like they belong.

She, too, knows what it’s like being the new student on campus, not knowing where to go, who to turn to, or – even worse – not knowing a helping hand is right around the corner.

“A lot of people don’t talk about how lonely it feels on the first day if you don’t know anybody,” said the North Kingstown native, second-year Psychology major and RI Promise Scholar. “I felt lost. I thought, ‘Maybe this wasn’t the best choice.’ I started second-guessing my decision to go to college.”

Once she became more active on campus, Holden discovered her passion for helping others, which she’s confident is her “purpose” at CCRI. In high school, she participated in numerous activities from academics to athletics, but wasn’t nearly as engaged during her first semester in college simply because she didn’t know what resources were available.

As Student Government President, her goal is to make sure others just like her realize their full potential. The first step, she says, is to help get the word out on everything her campus has to offer in an effort to increase student engagement.

“I want to leave my mark. I want to make an impact,” Holden said. “I like being busy and having things to do and finding ways to be involved.”

Until she joined Student Government during her first semester at CCRI, Holden was one of many students who went home directly after class without exploring the college’s vast resources. Now, in addition to serving as President for the upcoming academic year, she is working for the Enrollment Services office and competing on CCRI’s cross country team.

“My motivation as a student leader is to help the new students feel more connected and more involved on campus,” Holden said. “Our campus is a lot smaller, but we do have our own Newport community over there. That’s the good thing about our campus. There really are opportunities to bring the students closer when the community is smaller.

“It feels really good to be involved because you can help and influence the younger, incoming students and make them feel like they have a place. It’s a really nice feeling to know that you’ve helped someone adjust.”

Despite her involvement in various activities, Holden admits she had little to no direction after high school.

“I had no idea what I wanted to do with my life,” she said.

One day, while sitting in her guidance counselor’s office at North Kingstown, she spotted a RI Promise brochure.

“I made a decision then and there,” Holden said. “This is something that is a great opportunity.”

Enrolling at CCRI has changed her life, allowing her to remain active within the community and find the much-needed direction to pursue a career path. Last year, she worked in the Advising and Counseling Department and developed a strong relationship with her advisor, Robyn Greene, who encouraged her to get more involved with Student Government. She is enrolled in the college’s Joint Admissions Agreement (JAA) program and will transfer to the University of Rhode Island in 2020 to continue studying Psychology. Her long-term goal is to become a marriage and family therapist.

“It’s really easy to enjoy something that you’re passionate about. You know it’s worth it and if you have the drive to do it, it’s not a chore – it’s something you love.”