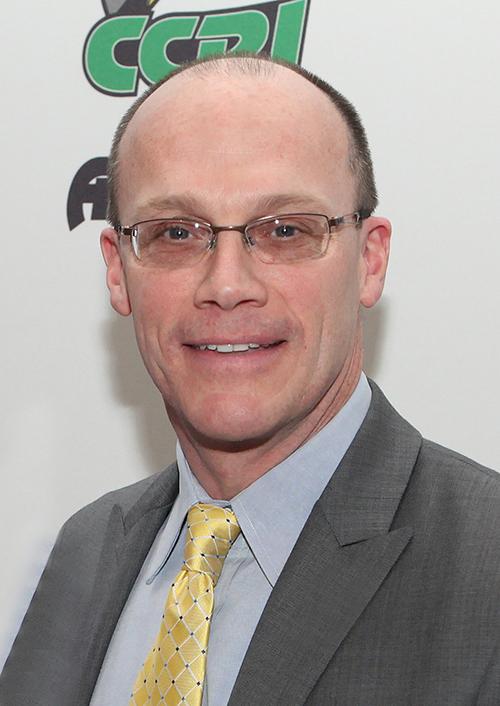 CCRI interim director of Athletics Kevin Salisbury will serve as the 3rd Vice President of the National Alliance of Two Year College Athletic Administrators (NATYCAA) this year after spending the last four years as a district representative.

Established in 1987, the NATYCAA represents athletic directors from approximately 700 two-year colleges in the United States and is dedicated to the continuing growth and development of two-year college athletics and the individuals involved through exchange of information, monitoring of legislation, promotion of academic excellence and increasing communication between organizations while encouraging a high degree of integrity in all endeavors. The NATYCAA is one of 17 professional associations operating under the guidance of the National Association of Collegiate Directors of Athletics (NACDA), which is the universal governing body for athletic directors representing more than 1,600 U.S. colleges and universities.

“This is an awesome honor,” Salisbury said. “It’s an opportunity to sit among the best of the best in collegiate athletics and be able to network and brainstorm for ideas that we can implement here at the Community College of Rhode Island. This is great news for our student-athletes, and our college.”

Salisbury, who has served as CCRI’s interim athletic director since 2017, is one of five executive officers under newly-appointed NATYCAA president Michelle Ruble. The NATYCAA committee also includes more than 20 executive members serving nine districts. Salisbury spent the past four years as an NATYCAA District I representative before the selection committee chose him as one of its three Vice Presidents for the upcoming academic year. Among his chief responsibilities will be selecting the male and female 2019-20 NATYCAA Scholar-Athlete of the Year award winners.

The NATYCAA’s chain of command changes annually with each of the five officers promoted to the next highest position, so Salisbury will serve as the board’s 2nd VP for the 2020-21 season and eventually become eligible to take over as President in 2022-23. Former CCRI athletic director Vin Cullen helped launch the NATYCAA 32 years ago, served as its president in 1995-96 and was a key figure in establishing its affiliation with the NACDA in 1999. He was elected to the NATYCAA Hall of Fame in 2004. Lou Pullano, who succeeded Cullen as athletic director in 2002, also served as NATYCAA president in 2005-06.

“To follow in the footsteps of my mentor, who was a founding father of this organization, is a privilege,” Salisbury said.

Committee members meet each winter to begin planning for the NATYCAA’s annual convention in June, which features guest speakers and lecturers from a number of colleges discussing important topics such as proper practices for hiring coaches, how to enhance the fan experience and a variety of health-care issues pertinent to student-athletes, notably the concussion safety protocol.

Salisbury credits the connections established through the NATYCAA and the support of CCRI Dean of Students Michael Cunningham with helping him add three new club sports to the Department of Athletics in 2018. The program expanded to include beach volleyball, men’s and women’s swimming and e-sports.

“Some of the stuff I learn with this group is just incredible,” Salisbury said, “from how leadership works on different campuses, how administrations support athletics – it’s very different across the country. I have certainly taken things from that convention through the years and put them to use at CCRI. When it came to selecting new sports, we researched trends across the country on what other schools were adding. The networking was very helpful.”