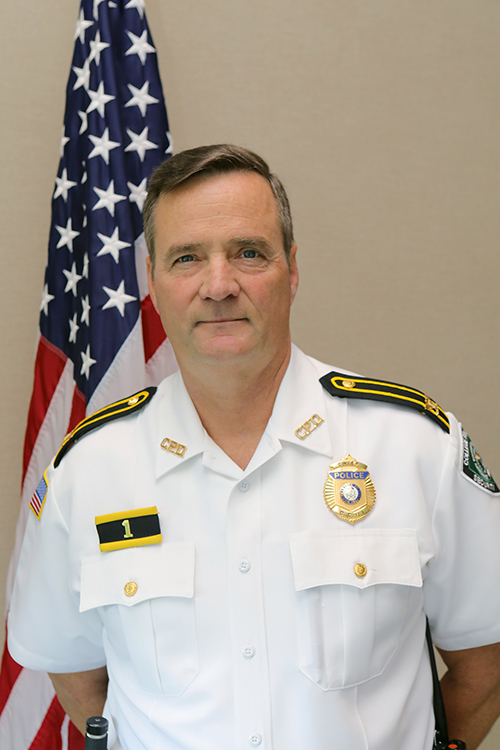 CCRI alumnus and retired Warwick Police Major Sean Collins has been announced as CCRI's Chief of Police and Director of Public Safety after holding the position on an interim basis since October of 2017.

The Community College of Rhode Island has announced former U.S. Army veteran and retired Warwick Police Major Sean Collins as its Chief of Police and Director of Public Safety, a position he has held on an interim basis since October of 2017.  Collins is a resident of Warwick, RI.

A CCRI alumnus, Collins has implemented a number of important initiatives since joining the college, among them improving the quality of Clery Act reporting, adding non-lethal weapons to the CCRI Campus Police department, introducing new emergency features across all campuses and developing a college-wide opioid crisis response. Collins also started the process to attain accreditation of the Campus Police from the Rhode Island Police Accreditation Commission.

Collins began his career in law enforcement with the Warwick Police Department, where he served 26 years and retired as Major of Operations. As the department’s Community Police Sergeant and Captain of the Community Services Division, Collins increased the number of community and neighborhood groups in Warwick and introduced the city to “National Night Out,” an annual, countrywide police event that encourages positive interactions between residents and members of law enforcement.

Collins also served as Chief of Police and Director of Public Safety and Emergency Management at Simmons College in Boston, MA, prior to joining CCRI. Adhering to the principles he established with the Warwick PD, Collins has brought a similar community policing philosophy to CCRI, working thoughtfully to improve communication between the Campus Police and Student services and developing enhanced protocols for interactions between students and officers.

In addition to his work on the police force, Collins served 28 years in the U.S. Army, first in active duty and later as a member of the Army Reserves. As a Special Agent-in-Charge of a Criminal Investigation Unit, including service in Iraq and Korea, Collins was assigned to U.S. Secretary of Defense Donald Rusmfeld as a member of his protection detail following 9/11. He was also a first responder during the 9/11 attack on the Pentagon, working on the crime scene in evidence collection and remains retrieval.

Collins earned his Bachelor of Science and a Master of Arts in Criminal Justice from Roger Williams University and obtained a certificate in emergency management and as an emergency medical technician from CCRI.