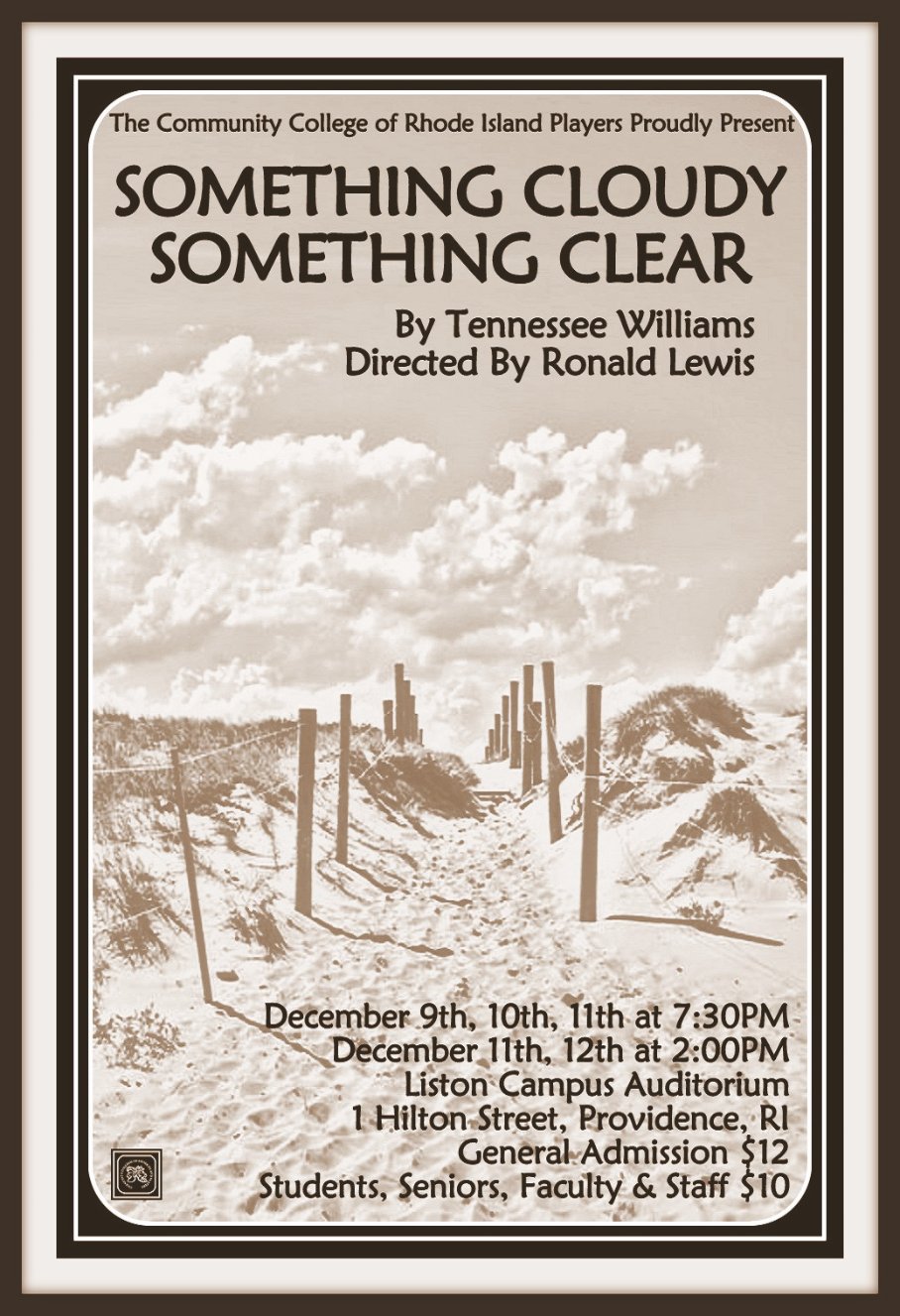 The Community College of Rhode Island Players wrap up their first semester of live, in-person performances this week with a rendition of Tennessee Williams’ Something Cloudy, Something Clear, an autobiographical look at the playwright’s summertime affair with a Canadian dancer prior to his big Broadway breakthrough in the 1940s.

This week’s production is the Players’ last of the fall semester, which marked the theater group’s return to live performances for the first time since February of 2020. Directed by CCRI alumnus Ronald Lewis, Something Cloudy, Something Clear premiers Thursday, December 9 at 7:30 pm at the Liston Campus Auditorium in Providence. Additional performances are December 10 at 7:30, followed by a 2 and 7:30 pm double feature on December 11, and a 2 pm matinee showing December 12.

General admission Tickets are $12 for general admission and $10 for seniors and CCRI students, faculty, and staff and can be purchased online at ShowTix4U.com. Per CCRI’s COVID-19 policy, attendees will be socially-distanced inside the theater and must wear a mask at all times in addition to showing proof of vaccination or a negative COVID-19 test result within 72 hours upon entry.

Something Cloudy, Something Clear is a journey back in time to 1940 Provincetown, MA, where a young playwright named August – living in a beach shack rewriting the script for his Broadway debut – unexpectedly meets and becomes infatuated with a dancer named Kip, joined by his wealthy travel companion, Clare, a woman pretending to be his sister.

Williams described the play as “one of the most personal” he’s ever written, a loose interpretation of his own struggles embracing sexuality as he teetered on the brink of stardom with his 1944 Broadway debut The Glass Menagerie, which catapulted the then 33-year-old Williams from obscurity to fame. The plot mirrors Williams’ real-life relationship with dancer Kip Kiernan, who left him to marry a woman and died four years later at the age of 26.

Originally written as a short play entitled The Parade in 1941, Something Cloudy, Something Clear made its off-off-Broadway debut 40 years later, encapsulating the pivotal summer in Williams’ life in which he “took a crash course in growing up.” Lewis, who this past spring collaborated with Daria Lyric-Montaquila and Kira Hawkridge to co-produce CCRI’s first devised theater production, Unity Poem: The Past, Present, and Future, felt a personal connection to the late Williams while directing Something Cloudy, Something Clear.

“So much of this play is autobiographical, and, astonishingly, so much of the play resonates with my experience of wrestling and understanding my desires, my hopes and dreams as a gay man living in an entirely different century,” Lewis said. “The double exposure of it all is really what I have enjoyed most.

“The courage and dedication of the cast and crew to engage deeply with this work has been super fulfilling. I really enjoyed helping them see the play clearly and also appreciated the insight that they brought to the table, which, in turn, helped me see myself – and this story – clearer.”

Something Cloudy, Something Clear stars Ilyus Evander of Coventry as August, Luigi Cubelloti of Providence as Kip, and Shelby Cray of Bristol as Clare, plus Smithfield’s Christopher Ricci, Warwick’s Mynor Rafael-Tirado, Colleen Farrell of Lincoln, and Mireya Celline Hoffens of Providence.

“Whether it's the 1940s, ‘80s, or 2021, queer people share the experience of self-fear, of coming out, of wanting, of rejection. This role [August] became deeply personal for me almost immediately after reading the script,”said Evander, a first-year Theatre Performance major at CCRI. “In so many ways, I have been August my whole life – a poet hungry for a stage. I'm so grateful to work with our director and the entire cast, whose pursuit of truth within the boundaries of the script remained as desperate as my own.”