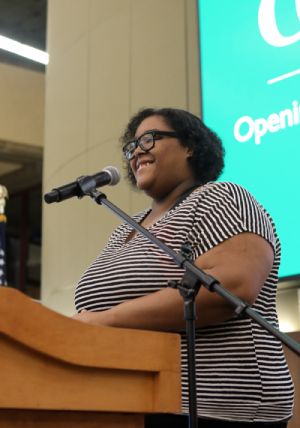 As the newly-elected Student Government President of the Community College of Rhode Island’s Flanagan Campus, Leyshell Williams promises to uphold an open-door policy, which is no small feat for someone who struggled to break out of her shell when she first arrived two years ago.

The shy, 22-year-old from North Carolina, who now lives in Providence, RI, is taking on more responsibility for this upcoming academic year in an effort to bring students of all backgrounds together while developing a stronger sense of community on campus.

“We’re working on inclusive outreach,” Williams said, “focusing on how to get these different demographics to come together. At the end of the day, we’re all students here and we’re all trying to get a better life for ourselves and our families. We’re hoping that can be something to bring everybody together.”

Williams endured bullying as a high school student at Providence’s Juanita Sanchez Educational Complex, but found a home away from home at CCRI, where she linked up with fellow students who shared her interests in comic books, anime and “all things weird,” as she described it, via the college’s Pop Culture Club.

Last year, she served as the club’s treasurer and continued to build self-confidence and self-esteem through various roles in Student Life, including her latest endeavor as a student employee at CCRI’s new Food Pantry. Williams spoke at the Food Pantry opening in March, an experience she says was as rewarding as it was nerve-wracking.

As she became more involved in on-campus initiatives, Williams knew the only way to implement the changes she wanted to see was to run for Flanagan Campus President. Bringing students together is a challenge that is close to her heart considering she, too, had trouble fitting in when she first enrolled at CCRI.

Her plan is to encourage others to get involved so they understand what the college has to offer and will be more inclined to reach out to those who were once in her position.

“Recently, I had someone come into my office and we just sat and had a conversation and I just basically told him why I was here and what I wanted to do. He was really happy with that and thought CCRI was a good for him,” Williams said.

“I think people who come to CCRI sometimes go right home from class and don’t always interact with the community, but I think that more involvement and more interaction with people would build a better support system. That support system will help them get through, get their degrees and better their lives.”

Thinking outside the box and taking advantage of CCRI’s vast on-campus resources has helped Williams move closer to her career goal of working in the Information Technology field. She recently earned an internship opportunity at Brown University, where she will help design websites, and wants to pursue her bachelor’s degree in Computer Programming when she transfers to Rhode Island College next year through CCRI’s Joint Admissions Agreement (JAA) program.

Williams has also developed a passion for community outreach while working with Student Government and hasn’t ruled out the long-term possibility of assisting in future projects outside of CCRI, such as efforts to bring more STEM (science, technology, engineering and mathematics) curriculum to youth in low-income or minority communities.

For now, she’s settling into her new role at the Flanagan Campus and embracing her responsibility as a major decision-maker, which she admits is one of the more difficult facets of being Student Government President.

“It’s easy to have ideas and offer them and get other peoples’ opinions, but to ultimately be the person to say, ‘OK, this one,’ it’s a bit daunting,” Williams said. “You don’t want to make the wrong decision, but you have to stick with the outcome and make the most of it. You basically have to know what experience you want to give the students and make your decisions based on that.”