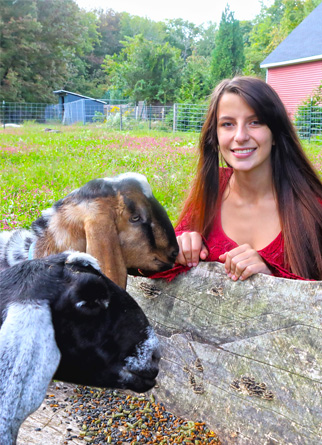 For her 7th birthday, Rachyl Travis’ older sister bought her a goat.

Within a year, she learned how to turn the doe’s excess milk into soap.

By the age of nine, she was selling her product at a local farmers market.

Now, the 17-year-old Scituate native – and innovator of the wildly-successful Rachyl’s Goat Milk Soap – is enrolled at the Community College of Rhode Island pursuing her Associate Degree in Business in hopes of one day expanding the company into a global empire so she can pay back all of the family and friends who’ve helped her through the years.

The story itself is practically woven into the fabric of Rhode Island entrepreneurship. What started as a hobby – she used to make the soap as gifts for her teachers and classmates – has become a daily labor of love and a lucrative business for Travis, the sixth of 11 children in her family, which includes six biological siblings, a stepsister and three foster siblings. She has been profiled in various newspapers and magazines since the age of 12 and appeared on an episode of “The Steve Harvey Show” in 2014 to promote the health benefits of her all-natural soaps and skin-care products. Goat’s milk, Travis says, has many unique properties and essential nutrients that help remove dead skin cells, provide protection from the sun and nourish the skin.

After being homeschooled for the last six years so she could maintain flexible hours to take care of the goats and run the business, college was the next logical step.

“I’ve always wanted to further my education, especially because I know Rhode Island has so many opportunities when it comes to business,” said Travis, who graduated high school a year early and is attending CCRI on a Pell Grant. “College is definitely different from being homeschooled. I was very nervous about it when I first started going, but there are such intimate classroom settings and the professors really care about you learning. They’ll take that time with you after class or before a class to explain things to you and make it easier. It wasn’t as big of a change as I anticipated, and it was definitely easier and a lot smoother than I thought.

In order to balance school with the business, Travis takes all of her classes on Tuesdays and Thursdays from 8 a.m. to 4:30 p.m. – sometimes staying until 6 p.m. depending on the course load that particular day. Mondays and Wednesdays are dedicated to making soap, which includes thawing the frozen goat’s milk, mixing it with lye, pouring in different oils, and letting it settle in warming trays housed inside a separate workshop on the three-acre Travis Family Farm, where her mother, Lillian, and older sister Jaklyn, help with each step of the process. On Fridays, they cut the molds into individual bars, which then take two weeks to dry before they’re sealed in separate muslin bags and shipped off to customers.

Weekends are equally busy. In addition to cleaning out the barns, bathing the goats and trimming their hooves, Travis spends Saturdays and Sundays at various farmers markets selling her full line of products, which has expanded to include 19 different soaps, assorted lip balms and hand-knit washcloths. While most sales come from the company’s website, Rachyl’s Goat Milk Soap is also available at Wright’s Farm and Dave’s Marketplace. To boost traffic locally, the family purchased a small shed in March fashioned into a makeshift shop at the foot of their driveway that opens from sunrise to sunset on weekdays and operates on the honor system, allowing customers to take what they want and drop their cash or check into a lockbox.

The daily grind for Travis, who still lives at home with her parents and six of her siblings, is hectic, but has calmed considerably in recent years. At one point, the family had more than 50 animals on the farm – chickens, cows, pigs, alpacas, dogs – but a tragic fire in 2014 destroyed the maternity barn. All the animals died except for five goats. The local community gathered in support of the family, raising funds to help rebuild the property or, on some nights, dropping off dinner at the house.

As part of her routine, Travis milks the goats seven days a week. One gallon makes an entire batch of the soap mixture, and each batch produces 88 bars. The family mixes five batches per day on Mondays and Wednesdays, so, all told, they use 10 gallons of milk per week to make more than 800 bars to keep up with their customers’ demands. They sell more than 300 bars per week during the peak summer months and have sold at least one bar in all 50 states – even Alaska.

The Travises epitomize hard work and commitment. Travis’ father built an addition onto their house as the family expanded and recently worked with Mical to build a separate barn at the back end of the property for Jacklyn’s wedding. The parents helped their children develop their entrepreneurial spirit at an early age, encouraging them to earn their own money and invest it wisely.

“They always told us we could have any animal we wanted as long as we could take care of them and we could pay for them,” Travis said. “My brothers would go shovel snow for people, babysit, or rake peoples’ yards and do landscaping, so they could make money for their animals.”

With a dream to market her products worldwide, hire employees and create more jobs in Rhode Island, Travis has found the perfect fit at CCRI, which gives her the flexibility to maintain her business while continuing her education.

“You can take different classes to find out what you really like and career path you want to move toward. I’m taking business classes, but I’m also taking Portuguese because I want to learn a language and, next semester, I want to take photography, because I really want to utilize everything CCRI has to offer,” she said. “All of the professors are amazing and I’m having a lot of fun learning.”