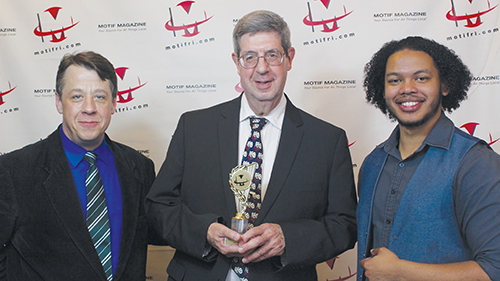 Students, faculty and alumni from the Community College of Rhode Island Theatre Program combined to win more than a dozen awards at this year’s Rhode Island Theater Awards at The Columbus Theatre in Providence.

Nominees for the annual awards ceremony are divided into six major categories, including College/University, Musicals, Professional, Community, Independent and Other, the latter of which includes spoken word, improv and youth productions. Winners are chosen based on the results of more than 4,500 ballots submitted by the public, from members of the theater community to fans and critics.

CCRI nearly swept in the College/University category for its 2018 production of “Green Day’s American Idiot,” winning seven of the eight awards, including Best Production.

“CCRI has its footprint in theater companies across the state, not just in performance, but in design, tech and management as well,” Clement said. “Aside from all the awards we received, which was terrific, the amount of overall nominations we had from past and present students was awesome.”

This year marks the third time CCRI has won the Best Production Award; the college also won in 2014 for its production of “The Last Days of Judas Iscariot” and again the following year for “The Rocky Horror Show.”

CCRI graduate Derek Smith of Woonsocket took home the Best Supporting Male Performance Award in the Community category for his portrayal of Macduff in the CCRI Players’ 2018 Summer Repertory production of “Macbeth.”

In addition, Clement joined recent graduate Luis Minaya of Providence to present recently-retired CCRI professor Bert Silverberg with Motif’s first-annual Community Champion Award for his 45 years of service as both a teacher and faculty advisor.

“He was my first theater mentor,” Clement said. “It was a wonderful moment.”

Other CCRI students, alumni and faculty won awards for outside productions, including:

“Our students go on to be some of the most amazing theatre artists in the state and around the country,” Clement said. “When they transfer to four year schools, they are generally the strongest, most determined, hardest working students in their programs, and when given the chance to thrive, have the most success.”