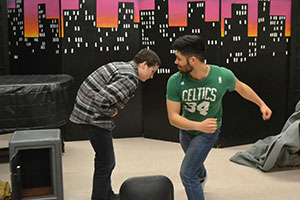 Clark D'Agostino and Francis Gilleese practice their fight scene for "The Heist" by Matt Greene, directed by Clarence Donath.

The CCRI Players will present “TESTED” – a program of six student-directed 10-minute plays in which characters are tested by life’s circumstances ranging from how handling the pressures of marital bliss to surviving torture as a political prisoner – this month at the Liston Campus in Providence.

The plays were selected from the 2017 Boston Playwrights’ Theatre’s Boston Theater Marathon, and student directors must meet various criteria regarding academic performance and active involvement in previous CCRI Players’ productions.

This year, Clarence Donath of Richmond will direct “Train Coming” by Chris Flaherty, “The Heist” by Matt Greene and “It’s a Test” by Terri Fisher, and Katie Russell of Newport will direct “Broken” by James McLindon, “The Last of the McLaughlins” by Bill Pendergast and “Speed Date” by David Susman. 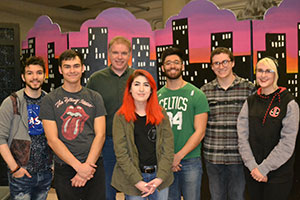