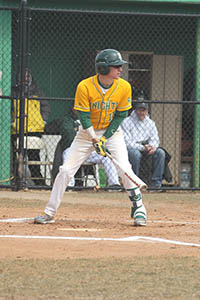 The inaugural game of the 2019 season picked up where last year left off with dominate Knight hitting. After allowing one run in the top of the first, CCRI answered back with authority, scoring 11 in their half of the first and all but winning the game then and there. The Knights would score one more run in the fourth and two more in the fifth to take a 14-1 lead. Mesabi Range scratched one run back in the top of the seventh but that was all they got and the game would end 14-2 in seven innings.

The Knights were led at the plate by freshman Alejandro Martinez (Cranston, RI) batting 2-2 with a homerun and a single. Sophomore Kyle McCann (Coventry, RI) went 2-3 with two doubles, two RBI and one run scored. Sophomore co-captain Nick D'Ambra (Coventry, RI) batted 2-4 with one double and one single while adding two RBI and two runs scored. Sophomore co-captain Zack Odsen (Providence, RI) went 2-5 in the game with one double and one single along with three runs scored. sophomore Justin Brown (Wallingford, CT) recorded 1-4 with a triple, two runs scored and one RBI. Sophomore Joey Barter (Coventry, RI) was 1-3, one single and one RBI. Sophomore Ray Aponte (East Providence, RI) batted 1-2, one single one RBI, a run scored and a stolen base. Sophomore Jake Frost (Cranston, RI) added a single while batting 1-3. Freshman Paul Sorel (Pawtucket, RI) rounded off the hitting registering a single going 1-1.

The second game of the day went in a quite opposite direction than that of the first one. The scoring was slow to start, St. Cloud scored one run in the top of the second and another in the fourth. CCRI tied the game up in the bottom of the seventh, scoring two runs. With the score set at 2-2, St. Cloud knocked in seven runs in the eighth inning. The Knights attempted to answer back, scoring two runs of their own, 9-4. However, another impressive offensive inning for St. Cloud sealed the deal as they scored six more runs in the ninth inning and won the game 15-4. 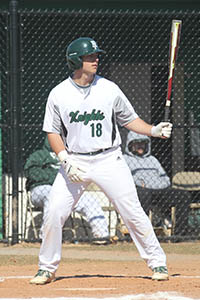 The Knights were led at the plate by Joey Barter as he batted 2-4 with a homerun and one single. Freshman David Meech (Douglas, MA) also went 2-4 in the game with a triple and a single. Asa Nyblom went 1-3 with a single and two RBI. Freshman James Pederson (Westerly, RI) batted 1-3 with a single. Nick D'Ambra added a single and run scored as he batted 1-5 in the game.

The Knights will next be in action on Monday, March 12th as they continue their Florida trip and take on Mott Community College (MI) for a Monday afternoon doubleheader.