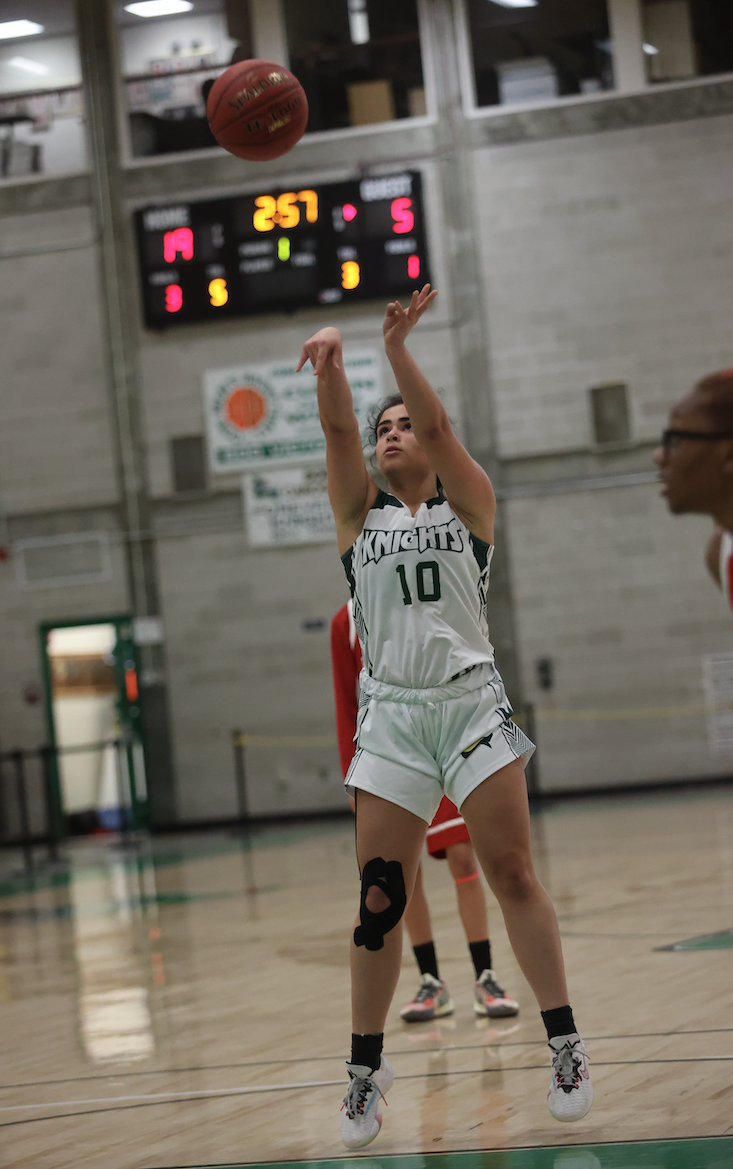 As a Rhode Island Promise scholar and graduate of the Community College of Rhode Island’s Class of 2022, Talia Thibodeau of Cranston, RI, is part of a unique group of students who accepted learning amidst a global pandemic as their “new normal.”

Thibodeau enrolled at CCRI in the Fall of 2020, just a few months after COVID-19 turned the world on its axis and forced high schools and colleges to transition to remote learning. She was part of the first – and only – class to attend an entire academic year exclusively online and will cross the stage at this year’s long-awaited in-person commencement ceremony as part of a special cohort that persevered amidst unexpected challenges.

“Honestly, it’s kind of surreal,” said Thibodeau, a co-captain on CCRI’s women’s basketball team and a member of the Dean’s List in each of her first three semesters at the college. “I feel like it all went by so fast, but it was extremely rewarding to be a part of this class.

“What we went through was so unprecedented, and it’s great to finally cross that finish line.”

But Thibodeau’s journey doesn’t end here; after earning her associate degree in General Studies with a concentration in Sports Media and Communication, she will continue her studies in the fall at the University of Rhode Island through the Joint Admissions Agreement (JAA) program.

Having spent most of her athletic career between the lines playing basketball for Cranston High School West and CCRI, Thibodeau may someday find herself outside the lines as a sports broadcaster or sideline reporter.

While the next chapter is a work in progress, the lessons Thibodeau learned – and the remarkable self-reliance she developed – at CCRI will undoubtedly carry her to new heights no matter which path she chooses.

“CCRI has so many great programs,” Thibodeau said. “Between online and in-person learning, it offered the best of both worlds and really prepared me for the next step as I transfer to URI. My professors were extremely helpful and always willing to go the extra mile, so it wasn’t a big leap for me.”

Like most students during the pandemic, Thibodeau had to adjust on the fly during her senior year at Cranston West, but the transition to at-home learning was a blessing in disguise. Having inherited her mother’s time-management skills, Thibodeau actually flourished in a remote setting; she expertly balanced her school work with basketball and her part-time job at Roger Williams Zoo, and when the time came to decide on her future beyond high school, she choose CCRI as the logical choice amidst the uncertainty of the pandemic.

A natural self-starter, Thibodeau picked up where she left off as a freshman during the Fall of 2020. She kept meticulous notes and always planned a week ahead so she never felt overwhelmed when deadlines were near. As one of the college’s top student athletes, she maintained a 3.77 GPA and was honored as one of the state’s top scholar athletes by the Rhode Island House of Representatives.

When CCRI reopened its doors for in-person learning in the Fall of 2021, Thibodeau returned to the classroom setting, giving her a much-needed taste of campus life, which included her long-awaited return to the basketball court. Thibodeau served as a co-captain on the 2021–22 Knights, who finished 17-7 during the regular season, won the Region XXI Championship, and earned a spot in the NJCAA Division III Women’s Basketball Tournament for the first time since 2013 – a remarkable feat after winning only six games in 2019–20.

The opportunity to play for a national championship in Rochester, MN, capped a satisfying journey for Thibodeau, who admits she’s likely played her final collegiate game as she begins focusing on a career in communications.

“It was such an amazing experience,” she said. “We knew at the beginning of the season we’d have to work hard for this and that it wasn’t going to come easy, but we put in the work and got to where we wanted to be.”

It’s easy to understand why Thibodeau describes her CCRI experience as “surreal.” Her success in the classroom made her a strong advocate for online learning during a time in which students didn’t have any other choice but to adapt. With her likeness on postcards, flyers, and websites, teammates jokingly referred to her as the “poster girl” for CCRI, a unique experience she learned to appreciate over time.

“I knew I’d like CCRI, but I never imagined I’d get this much out of it,” Thibodeau said. “Learning and being in the classroom setting gives me structure to my day. I was going to take an entirely different route after college, but I’m incredibly grateful I chose CCRI. I learned so much here.”