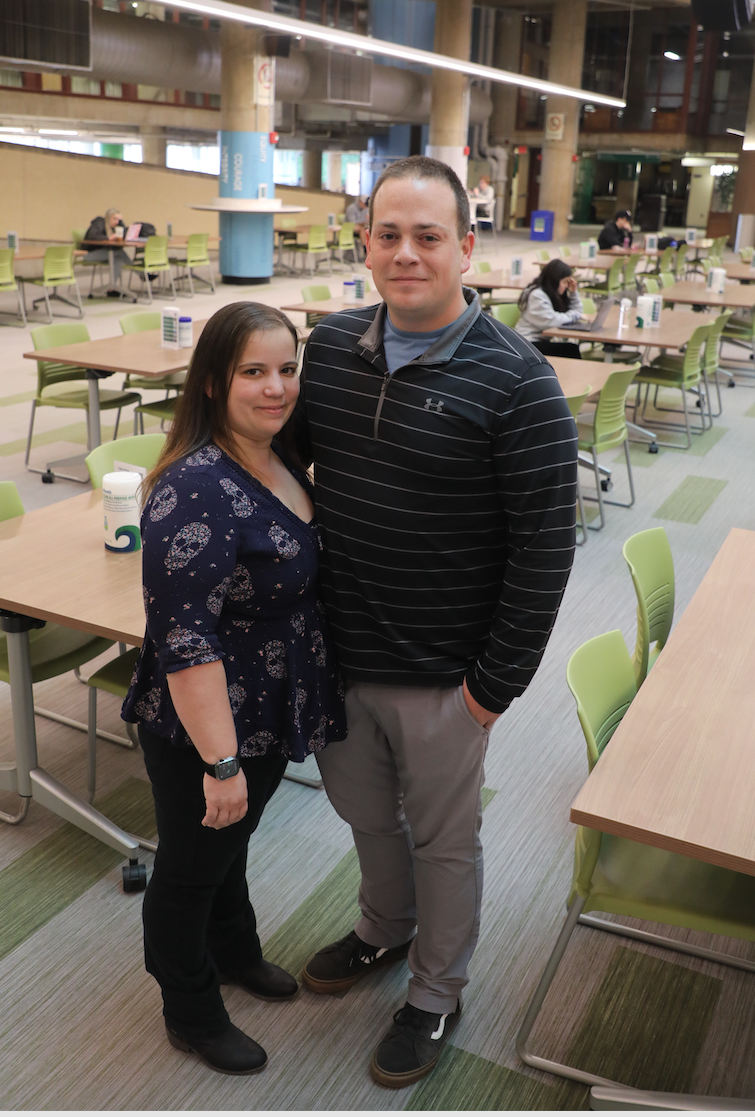 Through all their years together, which included marriage, the birth of their two sons, and sustainable, well-paying jobs in the same industry, David and Crystal Brown kept promising one another they’d go back to college someday.

That “someday” arrived at the onset of the COVID-19 pandemic, when, in the Fall of 2020, the Warwick, RI, natives and high-school sweethearts realized they could finish their degrees entirely online if they re-enrolled at the Community College of Rhode Island.

Two years – and more than two dozen fall, spring, and even summer courses – later, David, 34, and Crystal, 37, will cross the stage together at this year’s 57th commencement at the Dunkin’ Donuts Center with their Associate in Business Administration, celebrating a journey of commitment and sacrifice they hope will one day benefit their children, who, at 10 and 13, continue to look to their parents for guidance and direction.

“We’ve always pushed ourselves in everything we do,” said Dave, who works alongside his wife of 15 years as an Operations Manager at FedEx. “Once we committed to coming back to CCRI, we knew we had to do it not just for ourselves, but for our kids, to show them that if we put our minds to something we can accomplish it.”

David and Crystal met at Pilgrim High School and their story is similar to that of most high-school sweethearts. Crystal initially enrolled at CCRI after graduating in 2003 with the idea to pursue a career in education, but that lasted just a year and a half. Two years later, David graduated Pilgrim and enrolled at Rhode Island College to study communications. He, too, only lasted a year.

The couple married in 2007. By then, David had returned to college, this time enrolling at CCRI to study law enforcement. Two semesters later, he left college and began working part time, unable to balance work with attending in-person classes at two different campuses.

In 2009, Crystal gave birth to their first child, again putting college on the backburner. Shortly after their son was born, David landed a job at FedEx working overnights. Five years later, Crystal joined him at FedEx and also decided to give college another try, re-enrolling at CCRI in 2014 for paralegal studies, but the demands at home and work were too much to handle while trying to pursue a degree.

As David and Crystal began to climb the corporate ladder at FedEx, returning to college became less and less of a priority. They had sustainable jobs in a high-demand industry and had discovered a new passion for business management, but that promise of “someday” finishing their degree kept the door slightly ajar. When the pandemic hit in March of 2020, forcing most colleges to transition to remote learning, David and Crystal saw an opportunity to dive back in and complete their degrees online.

No traveling between campuses. No adjusting their work hours to fit their class schedules. They could enroll in asynchronous courses and pursue their associate degrees on their time. Assistance from FedEx’s tuition reimbursement program and CCRI’s COVID Recovery Finish scholarship helped ease the financial burden. They also had one another to lean one whenever the workload felt overwhelming.

“CCRI was amazing when it came to the flexibility of distance learning,” said David, who works out of the FedEx facility in Raynham, MA. “We didn’t have to commit to a certain time, which was helpful because our schedules changed constantly during the pandemic. We were both operations managers who were managing more than 30 employees in facilities with more than 200 people. We were working 60 hours a week and then coming home and doing our studies online.”

“The best part was most of our work was due on Sundays,” Crystal added, “so we could adjust our schedules accordingly and have everything done the day we knew it was due. We would not have been able to do this if it weren’t for online learning.”

Because Crystal had finished more credits than David when they both re-enrolled in 2020, the only way they could guarantee they’d graduate together was if David played catchup, so he took four classes in the Summer of 2021 and added an additional class each semester after that to ensure they’d cross the finish line hand in hand.

“We learned a little something each time we enrolled in college,” David said. “We enjoy our jobs and we like what we do, but we always want to keep moving forward.”

Having an associate degree will open a lot of doors for David and Crystal. They can pursue senior-level management positions at FedEx or continue their educations, which, David said, is still on the table. No matter what they do, they’ll continue to do it together – a commitment they made to one another more than a decade ago.