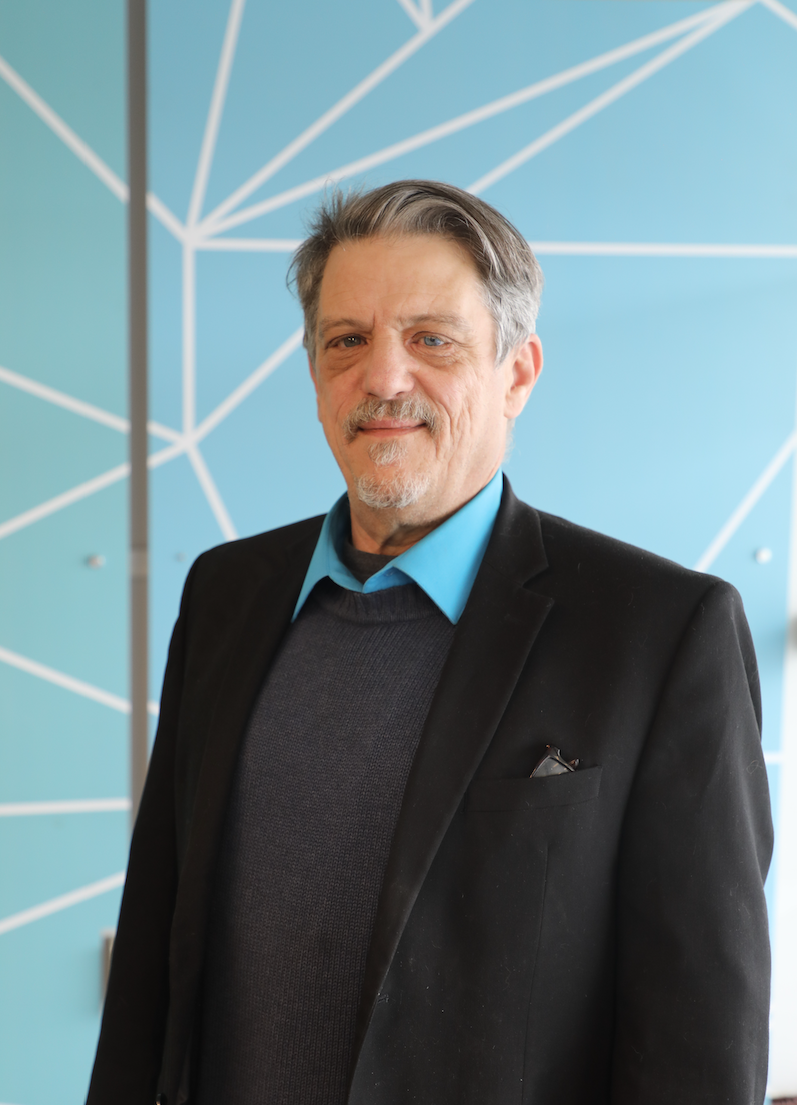 At 60 years old, Community College of Rhode Island theater student Ryk McIntyre often jokes that he’s older than most of his professors.

He has three children of his own – ages 27, 24, and 15 – and uses a cane to move around campus due to a genetic disability that left him with reoccurring back pain for the last two decades.

While McIntrye likes to say he’s “not your average college student,” the truth is he’s more in tune with the CCRI student body than one might think at first blush. A deeper dive reveals a humble, courageous student who, at 54 years old, rolled the dice on himself and found his true calling at CCRI – a student who blended seamlessly by constantly repeating to himself, “Sure, why not?”

When CCRI returns to the Dunkin’ Donuts Center next week for its first in-person commencement in three years, McIntyre will represent his fellow graduates as the official student speaker, the perfect blend of humor, humility, and encouragement to giftwrap the enduring spirit of the Class of 2022 – and summarize what CCRI has meant to his revival as a student.

“I found a community here,” said McIntyre, who serves as an officer for the college’s Phi Theta Kappa chapter and President of the CCRI Players student theater group.

“A major part of my journey at CCRI is the opportunities that have presented themselves that I otherwise would’ve never penciled in or seen on the radar. I kept an open mind and, through CCRI, discovered in my late 50s what I want to be when I grow up.”

McIntrye graduates next week with his associate degree in Fine Arts. A performer most of his life, McIntrye developed a passion for theatre at CCRI and will pursue his bachelor’s degree next fall in addition to his career in film and acting.

As an adult learner who returned to college much later in life – nearly four decades since the last time he stepped foot inside a classroom – McIntrye shares common ground with a large contingent of CCRI’s student body. College led him down a new, productive path while also steering him from the dark road of self-pity and bad habits that plagued most of his adult life.

After graduating Wellesley High School, McIntyre attended Nasson College in Maine in the early 1980s to study English, but lasted just 2 ½ years. “I was not a stellar student,” McIntyre admits.

Over the next two decades, McIntyre struggled to find his niche, working a variety of retail and inventory management jobs. He officially became disabled in 2003 and as his health worsened, he found himself with more free time on his hands, leading to substance use issues that nearly spiraled out of control.

“I took a look at my life and said, ‘Is this all you want it to mean?’” McIntyre said.

Friends and family suggested he go back to school. No way, he thought – too expensive. When he realized CCRI offered affordable tuition, a flexible class schedule, and resources for both adult learners and students with disabilities, McIntrye took the gamble and enrolled in 2015.

First, he tried his hand at becoming a social worker specializing in addiction counseling, then switched his major to English, but neither were the right fit. He had performed on stage for decades, mostly in the poetry slam community, and wanted to give theater another try, so he joined the Players. Under the guidance of program director Ted Clement, whom McIntyre credits with “opening a whole new world for me,” he starred in a number of productions through the years and in 2021 advanced to the semifinals for the Irene Ryan Acting Scholarship at the prestigious Region 1 Kennedy Center American College Theatre Festival.

With newfound confidence, McIntyre couldn’t help but answer the call when opportunities presented themselves. Encouraged by advisor Laurie Sherman, he joined PTK in 2017 and served as an officer for CCRI’s Pi Omicron chapter that – anchored by McIntyre’s work on a video collaboration with the Rhode Island Department of Health (RIDOH) to support mental health awareness – recently won a Distinguished College Project Award at this year’s International PTK Convention.

“My professors always went the extra mile for me. They pushed me to join organizations and run for office,” McIntyre said. “My initial answer was, ‘No, I’m not that kind of guy.’ Then I said, ‘Why not?’ I was open to things. I never ruled anything out because I hadn’t done it or didn’t work before.”

A few months shy of his 61st birthday, McIntyre crosses the stage next week to address his fellow graduates as the ultimate success story – a smart, fearless, committed student who exemplifies what it means to be part of the CCRI community.

“CCRI has been absolutely life-changing in ways I probably don’t even realize yet,” McIntyre said.