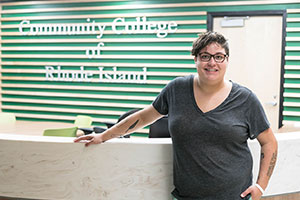 Victoria Dubois is the first to graduate from the Guaranteed Admission and Tuition Agreement program, also known as GATA, with Providence College's School of Continuing Education. The program allowed her to earn her bachelor's degree with a 33 percent tuition discount following her graduation from CCRI.

Warwick native Victoria DuBois vividly remembers the anxiety of transitioning from private to public school as a teenager.

She remembers eating lunch by herself in the cafeteria, drifting aimlessly through the school day with no friends to talk to and no one to lean on until she ultimately stopped going to class.

As she begins her next chapter in life this fall at Rhode Island College studying for her master’s degree in social work, the 21-year-old Community College of Rhode Island and Providence College graduate is focused on providing hope and encouragement for teenagers dealing with similar issues.

The first-ever graduate of both CCRI and PC’s Guaranteed Admission and Tuition Agreement (GATA) program, DuBois is pursuing a career as a high school or college social worker and hopes to eventually open her own practice.

She has transitioned from a shy, disoriented teenager stuck in truancy court to a hard-working, selfless champion for the tens of thousands of adolescents who simply need someone to talk to.

After receiving her bachelor’s degree in liberal studies at PC in May, she will attend RIC on a part-time basis while continuing her work on the relief staff at the Sojourner House, a shelter for victims and survivors of domestic and sexual violence.

The GATA program, a partnership the colleges entered during DuBois’ sophomore year, gave her a direct path to PC’s School of Continuing Education after completing her associate degree. GATA provides accepted students with a 33 percent tuition discount, which allowed her to earn a bachelor’s degree at nearly a fraction of the cost of attending a four-year university.

Without GATA, DuBois would’ve either racked up thousands of dollars in student debt, or perhaps not earned her bachelor’s degree at all because of the rising costs of tuition. Now she’s on the fast track to helping those struggling with the difficulties of adolescence the same way she did as a teenager.

“Growing up in the time I have, it’s been the time of school shootings and increased teen suicides. Our teenagers now are having a really tough time,” DuBois said. “I’ve known a number of kids that I went to high school with that if someone just sat them down and talked to them on a person-to-person level and just treated them like they want to be treated, they would’ve ended up in a different spot.”

DuBois was fortunate enough to have that outlet, but not without a few bumps in the road. During her first two years at Pilgrim High School, she struggled with severe anxiety as a result of obsessive-compulsive disorder. With no one to confide in, she began skipping class to avoid triggering her symptoms and inevitably wound up in truancy court.

“It was a big wake-up call to me,” she said. “I wasn’t going to achieve the things I wanted to achieve if I was doing what I was doing.”

At the direction of school administration, she began seeing Diane Ferrara, a clinical social worker in Warwick and adviser at Pilgrim.

“After those first few sessions, it really wasn’t forced. I just liked going there,” DuBois said. “Eventually, I would go there and eat lunch with her and talk. If she wasn’t there, I would’ve just continued to not go to school and continued to do what I was doing and not cared.”

Ferrara helped DuBois cope with her anxiety and eventually persuaded her to begin seeing a therapist and psychiatrist for additional support. Once she understood the benefits of having someone to talk to, DuBois began to think about ways she, too, could help others. Even her psychiatrist recommended she pursue a career in social work.

She knew she had an instinctive compassion and willingness to listen to others – it ran in her family. Her grandmother worked as a chef at the former Nickerson Community Center in the Olneyville section of Providence, where she helped teach proper eating habits to the children at the day care, many of whom didn’t have enough to eat at home. Her grandfather is a Catholic deacon and Narcotics Anonymous sponsor who hosted NA meetings in the basement of his church.

DuBois began laying the foundation for her own career while working as a page at the Warwick Public Library, where she “got a taste for dealing with the public.”

“We’d get a lot of group homes that would come in and I just started making friends with the people and learning their stories,” she said. “I realized at some point that I really just wanted to do that instead of putting the books away.”

DuBois turned the corner as a junior and senior at Pilgrim, scoring perfect attendance over her final two years while taking advanced placement courses. She enrolled at CCRI after graduation and said the experience changed her life.

“I’m really glad I came to CCRI,” she said. “If you come here for two years you can at least explore a bunch of options you weren’t able to explore in high school. You have more control over what you take. You’re given this independence to say, ‘What do you want to learn?’ You get to decide for yourself. It’s pretty awesome. It’s a place where you can really figure yourself out and figure out what’s best for you.”

She first considered a career as an English teacher or a journalist, but ultimately navigated toward social work while taking a course in political ideology with late CCRI Professor James Minuto. She finally zeroed in on social work during the stretch run at PC.

“I got closer to graduating PC and I was like, ‘What am I going to do? Am I going to go to grad school? Am I just going to get a job and work full time?’” she said. “That’s when I really started considering it and thinking about all of the influences I had been pushing around in my head. I just felt like I needed to do something that was going to help on a larger scale because I have some pretty big ideas and I really felt like I wanted to do something with them.”

Sharing stories and ideas with students from all walks of life – some with a clear path and others who were uncertain– helped DuBois narrow her focus and find her true calling. She also preferred the one-on-one interactions with her clients at the Sojourner House, which allowed her to make a greater impact on each individual. Working with adolescents is a natural fit.

“My high school experience has played a huge role in my whole life course and I think a lot of high school kids are placed in really tough positions sometimes as far as figuring all of these things out,” she said. “Their hormones are raging, everything is terrible, teachers and administration are concerned about their grades and coaches are concerned about athletic performance and parents are concerned about how they’re acting at home, but no one is ever asking them, ‘Hey, how are you doing? What are you feeling right now?’ If I can do that for one kid, I would be happy.”