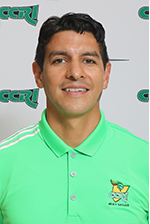 Gabriel Toro returns for his 12th year as head coach of the CCRI men’s soccer program after guiding the Knights to a 2-8-1 finish in 2018. He previously served as assistant coach of the program for two years under Victor Gaspar. Toro, a native of Colombia and a 1999 graduate of the University of Rhode Island, strives to continue the program’s winning tradition.

In addition to his coaching experience at CCRI, Toro has organized and coached clinics in Rhode Island and Massachusetts for boys and girls of all ages, with a focus on eliminating technical weaknesses and enhancing players’ strengths to improve their confidence and technical skills. In 2001, he led the Tolman High School boys’ soccer team to a second-place finish in the state tournament.

Toro has extensive playing experience with the semi-pro Lusitana Portuguese Club in Cumberland and the Providence Soccer League. After graduating from URI with a bachelor’s degree in psychology, he played three seasons for the Rhode Island Stingrays. At URI, he was a member of the No. 3-ranked men’s team that garnered a record of 19-1-3 and won Atlantic-10 championship titles in 1995 and 1996. He was honored with the Bob Butler Sportsmanship Award in 1998. 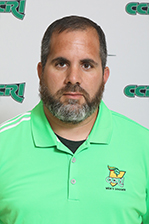 Mike Jerue returns for his 11th year as assistant coach and his seventh with coach Toro’s staff; he was previously the assistant to former men’s soccer coach Victor Gaspar. Jerue played at CCRI in 1999 and is a former Region XXI championship goalkeeper.

A former teammate of Toro’s with the Lusitana Portuguese Club, Jerue has extensive training and knowledge playing both semi-pro and professional soccer. He has more than 30 years of experience with goalkeepers, which is his main focus on the coaching staff. He is also the co-founder of the MK Goalkeeping Academy in West Warwick.

Jerue has coached at many levels, ranging from youth to high school to college. He recently began his third year as a coach for the North American Soccer League’s Rhode Island Reds FC. 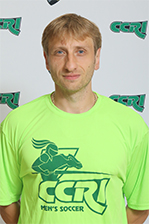 Rafal Murawski returns for his third year as an assistant coach for the CCRI men’s soccer program.

A longtime professional standout in Poland and England, Murawski began playing at 5 years old. His talent was evident at a young age by his peers in Lezajsk, Poland, and he was soon drafted onto the town’s competitive youth teams at the age of 9. He eventually rose through the ranks and competed on a number of all-star teams in Poland between the ages of 13 and 16.

By the time Murawski was a young teenager, he was fully dedicated to developing his soccer career and he moved away from his family to complete his high school education at a soccer school in Krakow, Poland, where he was coached by professionals and learned unique special training techniques.

After completing soccer school, Murawski played at the semi-professional and professional level for nine years on third- and fourth-division teams in Poland and England. His soccer career lasted more than two decades and ended in 2015 following a series of injuries.