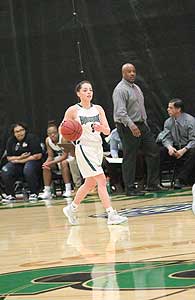 The Lady Knights and Generals had met once earlier this season at Sullivan with the Lady Knights emerging victorious 65-55. This game would be much harder for CCRI still playing without one of their Captain Jada Littlejohn (Providence, RI).

Despite being shorthanded the Lady Knights came out of the gates scintillating. Freshman Olivia Batastini (Providence, RI) drained two three pointers in the first quarter to score six points. Batastini was helped by Co-Captain Kat Raposo (Warwick, RI) who was coming off a career-high game versus Orange County and she kept that pace during the Championship adding seven points in the first quarter including a 3-pointer. Batastini and Raposo accounted for 13 on the Lady Knights' 18 first quarter points. for the Generals Traynise Delaney and Jayda Allen set the scoring pace accounting for nine of the Generals' 12 first quarter points as CCRI took a 18-12 lead after one quarter.

Once again in the halftime break Lady Knights Head Coach Doug Haynes made some adjustments to try and reverse the momentum for CCRI. The adjustments helped the Lady Knights keep the game in range as they were only getting scoring from Batastini and Raposo. Olivia Batastini sank two more 3-pointers in the third quarter to give her seven for the game while Kat Raposo was elevating her scoring pace by scoring 10 points in the quarter. The duo combined to score 16 of CCRI's 18 third quarter points. For the Generals Traynise Delaney scored 10 while Sam Bellinger and Mimi Picket each added four points as Sullivan kept pace with CCRI by scoring 17 in the quarter. With one quarter left CCRI trailed 51-47.

In the fourth quarter the Lady Knights kept the defensive pressure on but they were also in some foul trouble and that would end up costing them later in the game. Delaney and Picket for the Generals scoring 13 of their 15 points. Lady Knights Co-Captain Kat Raposo kept CCRI close with her pension for penetration and scored eight points for CCRI including going 6-6 from the free throw line. The Lady Knights also benefited from a technical foul late in the game and Olivia Batastini sank those critical free throws to tie the game 62-62. Jordan Northup (South Kingstown, RI) went 1-2 from the line to give CCRI a 63-62 lead with 31 seconds remaining. Traynise Delaney made two free throws with 21 seconds remaining to give Sullivan a 64-63 lead. CCRI turned the ball over and had to foul again and Delaney stepped to the line a sank two more free throws to give Sullivan a 66-63 lead with just 15 second remaining in the game. With no timeouts CCRI got the ball up the court quickly to see if they could tie the game with a 3-pointer. Olivia Batastini answered the call sinking her career-high eighth 3-pointer of the game to tie the game 66-66 with three seconds left on the clock. The Lady Knights stopped Sullivan on their last possession of regulation to send the game to overtime.

Unfortunately for the Lady Knights foul trouble got the best of them as they finished the game with four players on the floor and were outscored 11-4 in the extra quarter to lose by the final tally of 77-70.

Leading the way for the Lady Knights was Co-Captain Kat Raposo with another outstanding game scoring 30 points with six rebounds, six assists, two steals and a blocked shot. Raposo had an unbelievable tournament averaging 31 points per game and raising her scoring average to 17 points per game which is currently the highest scoring average on the team. For her tremendous efforts in the two games Raposo was named to the Region XV/XXI All-Tournament Team. Having her best game in a Lady Knights' uniform was freshman sharpshooter Olivia Batastini who scored a career-high 27 points with a career-high eight 3-pointers while adding four rebounds, one assists and a steal. Batastini shot 53% from the 3-point arc making 8 of her 15 3-point attempts on the day. For her outstanding effort and acumen from long-range Batastini was also named to the Region XV/XXI All-Tournament Team. Also playing well for CCRI was Co-Captain Waleska Kelly (Pawtucket, RI) with eight points, 10 rebounds, three assist, five steals and a blocked shot.

The next game for the Lady Knights will be Saturday March 9th at 2pm when they will face the Owls of Union County College in the District N/O Semifinal game held at Sullivan County College in Loch Sheldrake, NY. The winner of Saturday's game will qualify for the 2019 NJCAA Women's Basketball National Championship March 19-23rd in Harrison Arkansas.