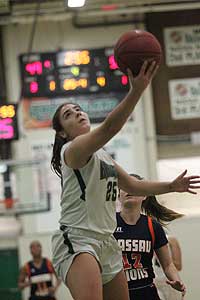 Warwick, R.I. – March 4, 2019: The CCRI Lady Knights basketball team traveled to Sullivan County College in Loch Sheldrake, NY to compete in the Region XV/XXI Tournament over the weekend. The Lady Knights were the No. 3 seed and faced No. 2 seed Colts of Orange County Community College from Middletown, NY on Saturday afternoon. CCRI defeated the Colts 67-60 to advance to the Region XV/XXI championship game versus No. 1 seed and hosting Generals of Sullivan County College Sunday at 12noon. With win also qualified them for the District N/O Tournament next weekend March 9th-10th at Sullivan County.

The Lady Knights and Colts had met twice already this year with CCRI emerging victorious in both meetings 57-51 in November and 65-42 in February. But as any basketball fan knows it is very hard to beat a team three times in one season. Making matters more difficult for CCRI was they played without their leader scoring, assists and steals Jada Littlejohn (Providence, RI) due to injury.

Orange County started the game well as Diamond Weeks opened the game with an immediate 3-pointer to take a 3-0 lead. The Lady Knights kept close in the first quarter due in large part to Co-Captain Kat Raposo (Warwick, RI) who scored seven first quarter points. However Weeks teamed with Juliana Noone to form a potent inside-outside tandem that accounted for 13 of the Colts 18 first quarter points to take a 18-13 lead after one quarter.

In the halftime break Lady Knights' Head Coach Doug Haynes and his staff made some critical defensive adjustments to stifle the Colts' offense attack. The adjustments paid big dividends as CCRI held Orange to just 13 points in the third quarter. In addition to the great defensive pressure the Lady Knights used they also kept scoring as Kat Raposo would not be refused. Raposo added nine points in the quarter including a 3-pointer and multiple drives to the basket. Raposo was helped by fellow Co-Captain Waleska Kelly (Pawtucket, RI) who scored six of her 14 points in the quarter while also dominating the glass grabbing rebound after rebound. After three quarters the Lady Knights trailed 50-49 and were gaining more and more momentum as each second ticked away.

In the final quarter the Lady Knights defense was at its pinnacle as they held Orange County to just 11 points while still scoring themselves. Kat Raposo kept up her scoring pace with eight more points by penetrating to the basket and either making difficult lay-ups in traffic or getting fouled in the process. Raposo also had two assists in the quarter to forward Arionna Ranglin (Cranston, RI) who scored four points in the quarter. Co-Captain Waleska Kelly also scored three points and maintained dominance on the rebounding front to help the Lady Knights secure the hard fought 67-60 victory.

Leading the way for the Lady Knights was Co-Captain Kat Raposo who scored a game and career-high 32 points with four rebounds, three steals and two assists. Also having a career day for the Lady Knights was Co-Captain Waleska Kelly who filled-up the stat sheet scoring 14 points while ripping down a career-high 23 rebounds with five assists, three steals and two blocked shots. Another standout for the CCRI was freshman Jordan Northup who charted her first double-double scoring 11 points including a 3-pointer with a career-high 10 rebounds, three assists and a steal.

The Lady Knights will face the Generals of Sullivan County College Sunday at 12noon to for the Region XV/XXI Championship. Both teams advance to the District Championship next weekend with the winner of the Championship also earning the higher seed and playing the lower seed out of Region XIX.