Warwick, R.I. – March 25, 2019: The CCRI Lady Knights Softball team traveled to Bayport, NY to play the Sharks of Suffolk County College for their season opening doubleheader on Saturday. The Lady Knights lost two hard fought battles with the Sharks 2-1 and 10-8. With the two losses CCRI begins the season 0-2.

In the circle for the Lady Knights in their season opener was Tri-Captain Hannah Caliri (Pawtucket, RI). Caliri pitched very well in her first outing of the season but was the hard luck loser after Suffolk was able to score two unearned runs in the bottom of the third inning and the Lady Knights could not regain the lead and fell by the count of 2-1. Hannah threw six strong innings allowing two runs on four hits striking out eight and walking four batters. Caliri pitched well enough to win but an error in right field with two runners on in the third inning allowed two runs to score and give Suffolk a 2-1 lead to which CCRI could not answer.

A the plate for the Lady Knights in the first game they were led by freshman Mackenzie Doyle (Glocester, RI) who had two hits including a double with a run scored. Freshman Alexis LaBelle (Warwick, RI) had the Lady Knights sole RBI when she scored Doyle in the first inning to give CCRI an early one run lead. Tri-Captain Hannah Caliri helped her own cause with a hit. Rounding out the CCRI hitting were Raevyn Watson (East Providence, RI) and Hannah Northup (Warwick, RI) who each added a hit apiece.

In the circle for the Lady Knights in the second game of the season was freshman Dayna Jackvony (Cumberland, RI) who showed great composure as she came out on the losing end 10-8 donnybrook with the Sharks of Suffolk County. Jackvony had a tough first two innings giving up two and five runs respectively but regained control in the third and fourth innings shutting down the Sharks while the Lady Knights made a valiant comeback on offense to tie the game 7-7. Suffolk answered with two in the fifth and one in the six to take a 10-7 lead. The Lady Knights answered with one in the seventh but it was not enough as Suffolk won by the final count of 10-8. Jackvony threw six innings allowing 10 runs with two walks and four strikeouts.

This game went back and forth from beginning to the end. The Lady Knights got on the scoreboard first with a run scored by Mackenzie Doyle. Suffolk answered with two in the first and five in the second to take a 7-1 lead. The Lady Knights came back with two in the third with runs scored from Raevyn Watson and Halley Ponitzman. Tri-Captain Maddie McDonald doubled and scored in the fourth inning. CCRI got three more in the fifth with runs from Mackenzie Doyle and Hannah Northup and capped by a mammoth blast from Halley Ponitzman to tie the game 7-7. Suffolk got two in the fifth and one in the sixth. CCRI answered with one in the seventh when Hannah Caliri doubled and scored on a fielding error. 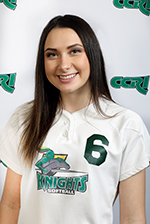 The Lady Knights have not time to rest as they travel to East Rockaway, NY to play the Lions of Nassau County College Sunday for a doubleheader beginning at 11am.