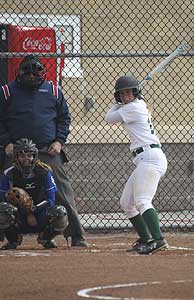 Warwick, R.I. – March 25, 2019: the CCRI Lady Knights softball team continued on their season opening road trip in New York by Traveling to East Rockaway, NY to play the Lions of Nassau County on Sunday. The Lady Knights bats erupted for 38 runs over the doubleheader to sweep the Lions 22-1 and 16-2. With the two victories CCRI improves to 2-2 on the season.

In the circle for the Lady Knights in the first game versus the Lions was Tri-Captain Hannah Caliri (Pawtucket, RI). Caliri was masterful throwing five dominant innings allowing just one earned run on three hits while striking out seven Lions' batters. Hannah also helped her own cause at the plate going 3-3 with a double three RBIs and three runs scored. Caliri had an easy outing as she took the mound in the first inning with an already unsurmountable 13-0 lead before she even threw a pitch. However, she remained focused to put forth an excellent outing in the circle to earn her first victory of the year and improve her record to 1-1 in the circle.

In the circle for the second game of the double dip for the Lady Knights was freshman Dayna Jackvony (Cumberland, RI) who earned her first collegiate victory throwing five strong innings allowing just one earned run on five hits, walking none and striking out seven Lions' batters. Jackvony shut down the Lions over the first two innings but ran into a little trouble in the third when she gave up a home run and an unearned run. After the third inning, Jackvony took control once again by shutting down the Lions in the final two frames to even her pitching record at 1-1 on the young season. She helped her own cause offensively by adding two hits including a double with an RBI and two runs scored. 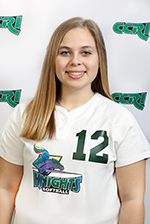 Once again the Lady Knights scored early and put the game out of reach with 11 runs in the second inning followed by two in the third and fourth and one in the fifth inning to easily win by the final count of 16-2. Leading the way for the Lady Knights was Mackenzie Doyle with three hits, two runs scored and an RBI. Also having a great multi-hit effort was Victoria Passaretti (East Greenwich, RI) with three hits, an RBI and a run scored. Tri-Captain Hannah Caliri had a homerun, two RBIs and two runs scored while Alexis LeBelle also had a homerun with two RBIs and three runs scored. Tri-Captain Maddie McDonald (East Providence, RI) had a hit and three runs scored and Hannah Northup had two hits and a run scored. Rounding out the big day were Halley Ponitzman and Ariel Lopez (Woonsocket, RI) with a hit and RBI apiece.

The Lady Knights next games will be Saturday the 30th when they host the Mustangs of Monroe College for a doubleheader at Winslow Park in Warwick beginning at 2pm.