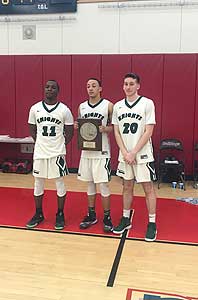 Warwick, R.I. – March 4, 2019: The CCRI Knights men's basketball team took on the Bulldogs of Bunker Hill Community College in the championship game of the Region XXI/District VIII Tournament on Sunday afternoon. A hard-fought battle for a spot in the championship game came down to the wire as the Knights missed their buzzer-beater effort and fell 73-71. The loss puts CCRI's 2018-19 final season record to 28-4 overall and 25-3 in Region XXI play.

The No. 1 regionally ranked Knights came to the Bunker Hill Community College campus looking to win the program's first Region XXI Title since 2016. After knocking off the No. 4 seeded Gateway Lions the hosting No. 3 Bunker Hill Bulldogs were all that stood in their way. Bunker Hill faced off with the Knights twice during the 2018-19 season with both teams taking one victory away. The first meeting came on November 20th away in Boston, MA where the Bulldogs came out on top 72-63. The second matchup came on January 26th when the then No. 5 nationally ranked bulldogs came to Warwick, RI. The close battle went the way of the Knights in the end 76-70.

Bunker Hill came out of the gates with high intensity and enthusiasm pushing them into the lead for most of the first half. CCRI took their first lead at the halftime buzzer off a Peter Wilson (Providence, RI) three-pointer sending the Knights into the locker room with a two-point lead, 44-42. The second half took on a different feel than that of the first with both teams looking to lockdown their defensive side of the court.

Bunker Hill held a six-point lead with 1:50 left on the clock at 72-66. Two massive defensive stops and back to back jump shots curtesy of sophomore Jake Gillis (Jamestown, RI) cut the lead to 72-71. CCRI stopped the Bulldogs once again and had a chance to win the game with the last shot. Sophomore co-captain Peter Wilson pulled up for a 16-foot jumper for the win but the shot would not fall. Bunker Hill secured the rebound, drew the foul and was able to ice the game from the line. Making the first shot and knocking the second off the rim to expire the game clock secure the victory for the Bulldogs 73-71. 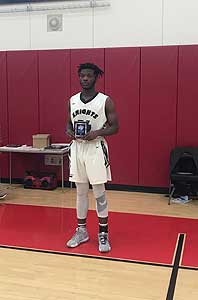 Head Coach Rick Harris commented: "Really an abrupt ending for such a special season. This team is a National Tournament caliber team but sometimes things don't always go as you would hope. It would take a monumental game to defeat Bunker Hill today on their home court and we were inches from doing that. Peter's shot to win the game looked good and it was one I would like our team to take again if the situation came up. You always want the ball in your best players hands when the game is on the line. Example of the very fine line between winning and losing. Bunker Hill though is a fine team and will represent Region 21 very well in the upcoming [NJCAA] National Tournament. Our team and season will be long remembered. 28 wins, an 18 game-winning streak. most importantly dedicated, hard-working young men who always listened and worked hard with me. They were a dream team to work with, many memorable moments made with this group. It is always tough when a season ends but they left everything they had on the court. They have set the bar high for future teams and I wish all of them nothing but the best".