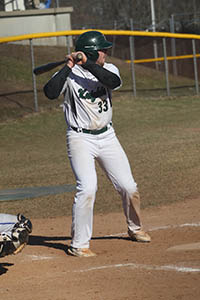 Looking to continue the ways of past games, CCRI would push the petal at the plate. Salve struck first with one run in the top of the second which was quickly countered with two CCRI runs in the bottom half. Freshman David Meech (Douglas, MA) got things started with a two-out single up the middle. An infield error brought him the third base and put freshman Alejandro Martinez (Cranston, RI) on first. A passed ball scored Meech and place Martinez on second. Alejandro would steal third base before being brought home himself by another wayward pitch to take a 2-1 lead.

CCRI would take the lead in the fourth inning with a solitary run being scored off the bat of sophomore Ray Aponte (East Providence, RI). Aponte launched the ball to left field for a wall-ball double, scoring Alejandro Martinez from third.

Salve Regina would score two runs in the fifth inning to take a 6-5 lead before the game was tied up by sophomore Justin Brown (Wallingford, CT) as he launched the ball over the left field fence and into the trees for a towering solo blast.

The game remained tied going into the seventh inning and Salve took the lead 7-6 in the top half. The Knights would open the flood gates, scoring nine runs in the bottom of the seventh to clinch the game a 15-7 win. Five walks, two hit batters and one error helped the Knights rack up the runs. David Meech kept the pressure going with a two-run single to right field. The game would end when Nick D'Ambra drew a walk with the bases loaded to score the 15th and final run of the game.

Sophomore Kyle McCann (Coventry, RI) started on the mound for the Knights and threw well, keeping the game level and the ball in play for his fielders to deal with. He pitched four innings, allowing six hits, and four runs while striking out three Salve batters. Freshman Peter Cohen (North Attleboro, MA) threw one inning, allowing one hit, two runs both of which were unearned. Freshman John DeRouin (Cranston, RI) threw one and two thirds innings in which he conceded three hits with one earned run and one strikeout. Freshman Kenrick Telemaco (Providence, RI) pitched the final one third of an inning, forcing the opposition batter to into an infield ground ball to end the top of the seventh.

The CCRI Knights baseball team will next be in action on Sunday, March 31st at 12 p.m. for a doubleheader against the Southern Maine Community College Seawolves.