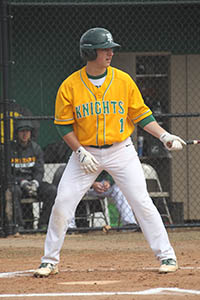 Warwick, R.I. – March 25, 2019: The CCRI Knights baseball team welcomed the Quinsigamond Community College Wyverns on Sunday afternoon for the first home doubleheader of the 2019 season. Quinsigamond would win game one 10-7 and CCRI would take game two 7-4. The results push CCRI's season record to 5-8 overall and 2-1 in Region XXI play.

The Wyverns started well, scoring one run in the top of the first before CCRI could answer back with four runs of their own, taking a 4-1 lead. Freshman Anthony Ramos (Cranston, RI) got things started with a single up the middle. He was joined on base by sophomore Zack Odsen (Providence, RI) who reached on an infield error. Ramos was brought home by sophomore Justin Brown (Wallingford, CT) of a single to center field. Sophomore Joey Barter (Coventry, RI) drove the ball to right field, bringing Odsen home for CCRI's second run. Sophomore Ray Aponte ripped the ball to the right-center gap for a triple, bringing both Brown and Barter home to give the Knights the 4-1 lead after one inning. 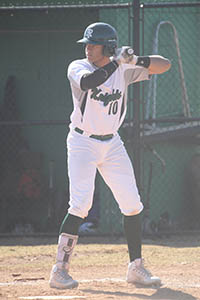 The Wyverns would take one run back in the second and were answered back by the Knights in the third inning when Ray Aponte once again came to the plate. This time driving the ball to center field for an RBI single, bringing home freshman David Meech (Douglas, MA), CCRI 5, Quinsigamond 2. In the fifth inning with a runner on second, Joey Barter pulled the ball down the left field line for an RBI double, scoring Justin Brown, who himself reach on his second single of the day to give CCRI a four-run lead, 6-2.

CCRI's starting pitcher sophomore Zack D'Andrea (Warwick, RI) was able to hold the Wyverns at bay for some time, conceding just two runs and striking out five batters through five innings. Keeping the scoring low until the sixth inning.

The Wyverns would fight back with vengeance, scoring four runs in the sixth inning and four more in the seventh. Joey Barter batted in his second run of the game with a single to left field but it was too little too late and the game would end with the Wyverns on top, 10-7 in seven innings.

The Knights were led at the plate by Joey Barter as he batted 3-4, one double and two singles with three RBIs and one run scored. Ray Aponte also racked up three RBI while going 2-4 with a triple and a single. Justin Brown was 1-3 with a single, two runs scored and one RBI. Both Anthony Ramos and David Meech each recorded singles while going 1-3 and adding one run scored.

Game two appeared to pick up where game one left off with Quinsigamond scoring four runs in the third inning however CCRI would overtake them by scoring five runs in the bottom of the third. Anthony Ramos once again got things started, this time stretching what looked to be a single into a double to left field. A pass ball moved Ramos to third and he was brought home by Zach Odsen's single to right field. Sophomore Jacob Frost (Cranston, RI) was brought home off the bat of Joey Barter driving the ball to left field for an RBI single. Trailing 4-2, Zack Odsen scored off a pass ball that put Barter at third and David Meech at second. Freshman Alejandro Martinez (Cranston, RI) would take the lead back for the Knights with a two-run single to left field, scoring Joey Barter and David Meech.

Scoring would halt after this point and CCRI would come out on top in game two 5-4 in seven innings.

The Knights offense was speared by Alejandro Martinez batting 3-3 with a double and two singles along with two RBI. Zach Odsen batted 2-4 with two singles, one run scored and an RBI. Joey Barter stayed productive, batting 1-3 with a double, run scored and one RBI. Anthony Ramos, David Meech, Jacob Frost and Ray Aponte all registered one hit each to round off the offense.

The CCRI Knights baseball team will next be in action on Tuesday, March 26th at 3:30 p.m. as they host the Knights of Northern Essex for a league contest.