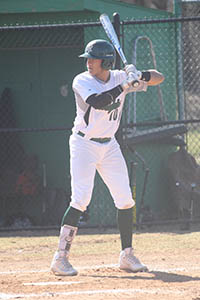 After splitting the first league meeting of the 2019 season, the CCRI Knights came into Tuesday looking to get a leg up on the rest of the region. The scoring started early when CCRI tallied four runs in the bottom half of the first. A bit of sloppy play led to these runs. Two runs were scored off an infield error and a third came from a walk with the bases loaded. Sophomore Jacob Frost (Cranston, RI) batted a run in off a sacrifice fly to centerfield, scoring sophomore Joey Barter (Coventry, RI) to take a 4-0 lead.

The Knights poured it on in the third inning, reacting to the two runs Northern Essex scored in the top half, CCRI scored seven runs in the bottom half. This inning was highlighted with two Knights going yard. Sophomore Ray Aponte (East Providence, RI) got things started with a two-run shot to center field to give CCRI a 7-3 lead. Freshman Anthony Ramos (Cranston, RI) knocked in Jacob Frost of a single up the middle to score the eighth Knights run. Joey Barter then smacked a grand slam over the left-center fence giving CCRI a 12-3 lead.

CCRI would score three runs in the fourth and seven more in the fifth inning to answer back at Northern Essex's six runs between fourth and sixth innings. The Knights would see out the game, winning 22-9 in seven innings.

The Knights offense was led by Anthony Davis batting 5-5 with a double, four singles, four runs scored, three RBI and a stolen base. Joey Barter went 2-4 with a grand slam and a single, 4 RBI and three runs scored. 3-1 in Region XXI play. Ray Aponte batted 2-2, a two-run homer and a single with three RBI and three runs scored. Kyle McCann was 1-3 with a double, three runs scored and one RBI. Freshman Alejandro Martinez (Cranston, RI) went 3-3 with three single and a run scored. Sophomore Zack Odsen (Providence, RI), sophomore Justin Brown (Wallingford, CT) and Jacob Frost each recorded one hit to round off the CCRI offense.

The CCRI Knights baseball team will next be in action on Thursday, March 28th at 3:30 p.m. as they host the Salve Regina Seahawks for a single game.