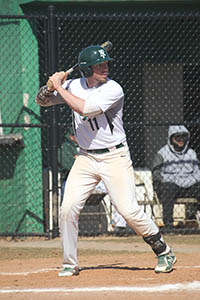 Warwick, R.I. – March 20, 2019: The CCRI Knights baseball team continued their Florida trip as the faced off with the Raiders of Seminole State (Sanford, FL) on Friday for a single game. The Knights played well early and took a 4-0 lead but the bats of Seminole State would not be held quiet as the Raiders would score 17 unanswered runs and win the game 17-4. The lose drops CCRI's season record to 3-6 overall.

After splitting a double header with Minnesota West Community & Technical College the day prior, CCRI came into Friday looking to continue the impressive offensive displays of recent. The start was encouraging as the Knights opened the scoring with one run in the top of the first, two runs in the second and one run in the fourth. Trailing 4-0, going into the bottom of the fourth Seminole State would strike back hard with two runs in both the fourth and sixth innings, sandwiching an immense 13-run fifth inning. The scoring would stall after this and CCRI would fall 17-4.

The CCRI offense was led by sophomore Justin Brown (Wallingford, CT) as he batted 2-2, one triple and one single with one RBI and a stolen base. Sophomore co-captain Nick D'Ambra (Coventry, RI) went 1-2 with a triple and one RBI. Freshman David Meech (Douglas, MA) batted 1-3, a single with one run scored. Sophomore Zack Odsen (Providence, RI) went 1-4 with a single and a run scored.

The CCRI Knights will next be in action on Saturday, March 16th as they take on the Chiefs of Waubonsee Community College (Sugar Grove, IL) for their final game of their 2019 Florida trip.