Knights Win One, Drop One Versus Minnesota West in Florida 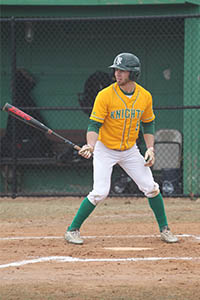 The Knights amassed 14 hits as a team and were led by sophomore co-captain Nick D'Ambra (Coventry, RI) going 4-4, one triple, one double and two singles with five RBI, three runs scored and a stolen base. Sophomore Ray Aponte (East Providence, RI) batted 3-4, two doubles and a single with two runs scored and one RBI. Freshman Anthony Ramos (Cranston, RI) went 2-3 with four runs scored and one RBI. Sophomore co-captain Zack Odsen (Providence, RI) was 1-2 with a single, three RBI and one run scored. Freshman Alejandro Martinez (Cranston, RI) batted 1-2, a single with two RBI. Sophomore Asa Nyblom (Wakefield, RI) went 1-3 with a single and one RBI. Sophomore Kyle McCann (Coventry, RI) was 1-3 in game one with a double and two runs scored. Sophomore Justin Brown (Wallingford, CT) batted 1-3, a single, one RBI and a run scored.

Game two started off well for CCRI as they scored two runs in the bottom of the first inning. However, Minnesota West would strike back with one run in the top of the second and six additional runs in the third inning, taking a 7-2 lead over the Knights. The CCRI bats fell silent and could not produce much at the plate. One more run would come for Minnesota in the fourth inning as well as two more in the sixth, expanding their lead to 10-2. CCRI would take back two runs in the bottom of the seventh, but it was too little too late and they would lose game two 10-4.

CCRI's offense struggled in game two, only recording two hits. Freshman David Meech (Douglas, MA) went 1-2, a single with two runs scored, two stolen bases and one RBI. Asa Nyblom recorded the other hit while going 1-2 with a single and one stolen base.

The CCRI Knights baseball team will next be in action as they face off with Seminole State (Sanford, FL) on Friday the 15th for a single game.